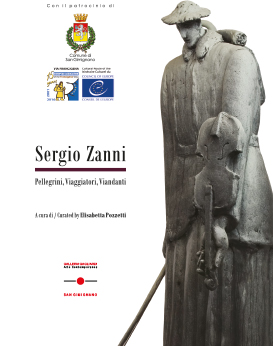 Silent archetypes for imminent guerrilla warfare
The gaze seems to be lost in the hollow sockets of those lightless eyes, as they have seen it all. The attention shifts to the coats that appear to be endless, like armours in the wind of an ancient time, like cassocks that survived a lost classicism. Supported by ancestral lightness, Sergio Zanni’s figures have, on the other hand, all the painful heaviness of the world’s remembrance.
The day is dreary, of a month of May that feels like autumn and calls for trench coat and umbrella. The countryside around the city of Ferrara stretches its belly towards the fecund rain. I find so much love in these desolate and solitary latitudes. Not even the greyness of a pitiless sky can dampen my enthusiasm. I will see Sergio again and, after many years, I will be able to rediscover the tale hidden in his smithy. Indeed, his works tell stories, tales of the Homeric tradition that mix the naïve wonder of childhood and the ancestral nature of the myth, in other words stories that have not been written (not yet anyway), but still have the deflagrating power to sail through the centuries unharmed. All these presences seem to be busy living their own lives, they do not look at you, they are almost as bashful as their demiurge. But just like what happens with him, if you only take time to ask questions, the silence is shattered by the language of the spell. Those terracotta beings enclose a micro-world of thoughts. Their tiny heads stand on bodies that, like Doric columns, support their entire existential weight. There is no burr whatsoever in the shape; the bodies are compact, solid, basic volumes. The absolute synthesis is typical of an achieved abstraction, of a reached landing place. The grandeur of the genius lies in taking away matter, seizing the essential without losing strength. Something solemnly archaic lingers in these works. The Charioteer of Delphi breathes in those bodies, innervating them with a pantheistic sacredness, blowing that same concentration aimed towards the unknown. If Plato were alive today, he would scream even louder his scorn for art, perceived as both fascinating and potentially subversive, since it is inspired by θειοςϕοβóς, by divine terror. Zanni’s sculptures possess an unsettling grace; they flatter you by cajoling you with the apparent sweetness of the figures, lyrical and suspended, at the same time confining you to the darkest corner of the revived conscience. And why does this happen? Because they live. They live off the artist’s reflections and turmoil, off his questions to which comprehensive answers will never be given, and the echo of which will be passed on in the whispering of the autumn leaves. After all, it is not important to find answers to these questions; the important thing is to never stop searching. It is imperative to refrain from following the crowd, from giving in to conformism, which is so accommodating yet sterile at the same time. Zanni’s subjects are lone trench fighters. They do not settle or give in, and they are not up for sale. They are holders of their own truth which strengthens their identity. They themselves are seeds that fecundate our imagination. They are powerful “allegories”, in other words they communicate something other than the material substance of which they are made. The physical construction is the arch, the signifier, from which the artist shoots the arrow, the meaning. Before that cusp, it will be difficult for us not to get hit. His “noble simplicity and quiet grandeur” does not come from Winckelmann, although his works could be defined neo-classical due to the love that shows through for ancient times, but they are rather inspired by Nietzsche’s Apollonian - Dionysiandualism, by an attitude that can be found in pre-Socratic thought, of a pungent and constant critical analysis of reality. Sergio has a romantic disposition, Friedrich-like, apparently hoisted at the top of a mountain, of the vessel of life, just like his characters, nonetheless with a stormy sea stirring in his soul. Greek tragedy, along the lines of Sophocles or Aeschylus, would also agree well with Sergio’s innermost feelings. The only catharsis lies perhaps in letting his “creatures” roam free, like nomads always in search of increasingly difficult and stimulating destinations, which gratify themselves in the exclusive curiosity of the person who admires them. The wayfarer, then, is not just a topic for the artist to develop: it is the very essence of the artist’s decades-long search. That which he creates represents himself, the investigating and always unsatisfied ego of the one who does not give in to the lethargy of easy and all-talk-no-action intellectualism. Instead, he stands in the front line of guerrilla warfare, and he does this with his feet, perhaps even bare, in order to feel and suffer the rough surface of the soil and of the dialogic debate between generations, the indefeasible tendency towards the transcendent, the indifferent passing of time and the onset of aches and pains. The wayfarer is also a person who travels through time and space. He is the bearer of stories and the custodian of wisdom. Hovering over the precipice that separates the past from the unknown, between tradition and subversion. He is the person that sews together an interior baggage of experiences and anecdotes through his nomadic lifestyle. Lastly, he is the one who considers spirituality the only wealth which is worthy of being treasured during our eventful earthly existence. For all this and much more, Sergio’s characters are not simple actors in a plot looking for an author, but rather untiring Titans of our times, rebels par excellence against triviality and reactionary to the prevailing apathy and indifference. Archetypes of a mankind on the move, in whom burns the fire of inspiration and the stubborn courage to always evolve without ever betraying the deep and unfathomable roots of the ego.