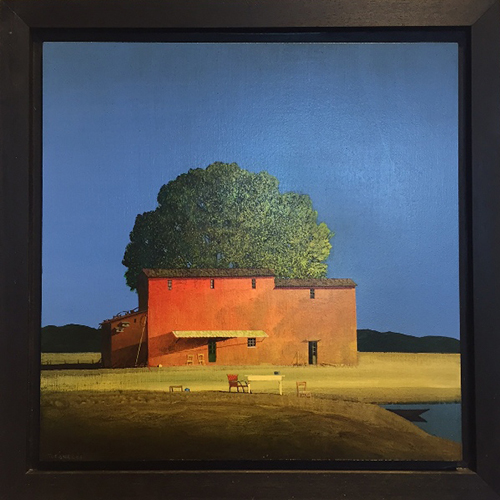 Alessandro Tofanelli exhibits in our gallery since 2014.

Alessandro Tofanelli is an eclectic artist: painter, photographer, director of films and documentaries on nature, but he lives his art, an art that involves both man and artist in a perfect symbiosis, in extreme simplicity. He sees the "meaning of life", his own and life in general, as being linked to the land, made up of men who still tell stories and of stories about men, and it is from here, from this lifeblood, that his artistic life is nourished.

Tofanelli has always been surrounded by nature, considering it a friend: he lives it, breathes it, makes it his own, interprets it by giving it voice and painting it, transforming it into poetry: this is what Tofanelli gives us.

The pictorial universe that Tofanelli represents is not an imaginary world, but then again it is: it is a time long gone, when woods were unspoilt, when farmhouses were occupied by big families and not divided into apartments passed off as country houses, when the air was clean and the landscape was well-tended; in a provincial area, slightly secluded, where men belonged to the land and lived according to the pace of the seasons, and that same land rewarded them with its fruits.

For Tofanelli, every painting becomes a world of its own, a reality bordering with dreams, an Eden in which life is simple, lived according to the slow rhythm of everyday gestures. The artist invites us to wander through his works, to disappear behind a farmstead, inside a house or in a vegetable garden, to lose ourselves in a poplar grove, listening to the sound of the wind rustling through the leaves.  Although men are never portrayed, we can sense their presence thanks to the inclusion of everyday objects which tell about their life and story: there is an all-encompassing sense of peace. Each one of the artist's works is like an inner self-portrait, authentic, of a reserved painter who expresses his own personal story in his paintings, with the story of his land and his love of nature. It is also the story of a man who has always been accustomed, as a multifaceted artist, to perceiving and transmitting magic that touches the heart: real images of a today that entraps the light enchantment of poplar groves, lagoons and channels. Fishermen’s huts, abandoned boats surrounded by shrubs, silent houses; they all seem to belong to a time outside of time....

Tofanelli and time outside of time: time does not pass, because it is the time it takes…

…to wait for a dawn or a sunset, to wait for a heron, to wait for the rain to stop, for the cloud to recede and leave room for the sun and, in that moment, that glittering vision is captured and made visible through the colours and the meticulous stroke, with each blade of grass, each leaf, each object reproduced by the brush, but also dictated by the great sensitivity of the Artist. This is the time it takes, waiting patiently, to grasp that unrepeatable moment and forget this frenetic and corrupt humanity of ours, perpetrator and, at the same time, victim of the revenge of an outraged, stricken, tortured and annihilated nature: Tofanelli launches a message of respect, deference and devotion that is owed to this world that hosts us and that has been living for much longer than we have.

An artist who can still surprise us, however, giving us the opportunity to enter a surreal, unsettling and ironic dimension where everything is possible again precisely because it is genuinely desirable: after all, it is the time that it takes, just enough to share a friendship, an understanding of coexistence, to be together and to help each other: because we are us, we are a community, and this is our strength.

The places where all this can happen are undoubtedly his islands, which rise from the lake like tiny microcosms, small houses surrounded by a strip of land, where life unfolds at an uncertain and unrecognisable time: it could be just before dawn or right after sunset, where small three-wheelers, bicycles, chairs and ladders are parked, bearing witness to a life that is lived. With a boat, on a silent lake lit only by a slice of moon, we meet an island inhabited by a petrol pump and a fruit and vegetable store, or an island where, in that tiny outdoor cinema illuminated by the faint light of an old lamp, we can come together to watch a film.

In this solo show, Tofanelli re-proposes the landscapes he loves but never in the same way, all capable of enchanting and arousing a poignant sense of calm, peace and poetry: each of them inspires us to find our own story, to imagine something different, unconventional and unusual, spurring us to use our imagination, to re-live our memories.

Tofanelli's works tell us that the meaning of life is to live at peace with ourselves, with others and with nature, in harmony with it.

Could the meaning of life be to "search for beauty", "search for the truth", "search for oneself"? Perhaps all three things together. In his paintings, they are found in a single message: Love, in the broadest sense, of truth, of life in all its forms. As a Man and as an Artist, this is Alessandro Tofanelli…

The act of painting by Alessandro Tofanelli is the age-old mastery of technique; all these factors together commune with a modern interpretation which is born of today, of the instantaneousness of a forgotten memory, isolated, silent, free. It is precisely silence, be cause his paintings are not merely to be seen but also to be listened: a silence of what is immobile, slowly built up by colour, of what is so loved as to be unapproachable, sacred, not of this world. His poetic imagination find its place, recognises its "humos" and is drawn into a rigorous balance of form and at the same time imaginative. His paintings are "landscape portraits" not portraits in the literal sense, but images characterised by an infinite number of physiognomic variations, by theatrical lighting specific for that artificial scene, conducted by a skillful director and the result of a unique intellectual operation. Portraits of non-existent landscape, fruit of stratification of images dear to the artist, images composed of memories, elaborated again by the art of memory. Tofanelli is a romantic who takes his time. His brush strokes accentuate each blade of grass, each branch of a tree, each flower in a meadow in way that is a soft and mottled. It is as if he caressing the nature he loves with complete tenderness. This quality is revealed in a moltitude of ways, where he sees beauty in the simple, elegance of nature. His paintings inspire a feeling of tranquility and us can only observe, with discretion, the details and "listen to" that spontaneous and slowly uncontainable creative force which characterizes each detail of the his paintings.

Alessandro Tofanelli was born in Italy in 1959.

Alessandro Tofanelli, in 1977 he graduated from the Arts’ Institute in Lucca and then moved to Milan, where he attended the Brera Art Academy. Whilst in Milan, Tofanelli collaborated as an illustrator for several magazines published by Rizzoli and Mondadori. In 1975 he won First Prize for his work ‘La Resistenza’ which was exhibited at the Modern Art Gallery in Lucca. In 1984 Tofanelli went on to win the much coveted ‘Giotto d’Oro’ prize and in 1987 he won the ‘Best Painter under 35 Years of Age’. Since 1977 Tofanelli has exhibited his work in a number of prestigious galleries throughout Italy and abroad. He has always combined his painting with his work as a professional photographer and a television videodocumentarist. When asked about his painting, Tofanelli states that he wants to investigate the relationship between time and memory, and to properly do this he has chosen landscape his favourite subject. Landscape, to him, is a privileged point of observation to contemplate the flow of time as well as to place memories of forgotten places and people whom he wishes to remember. Although he paints landscapes, Tofanelli is no conventional genre painter. The perspectives are tenderly distorted, so that depictions of grass and trees and horizons become subtle evocations of memory and passing time.

Prizes won: in 1975 he won the prize "La resistenza in Lucchesia" (the painting is in the Gallery of Modern Art in Lucca) and the first prize "Concorso INA- Touring" at Palazzo Strozzi in Florence. In 1984 he won the "Giotto d'Oro" prize, in 1987 he won the "Onda Verde" prize in Florence and the international "Ibla Mediterraneo" prize. His paintings are auctioned at Christie's.

2018: Production of the film "44 days", written and directed by him (among the actors: Stefano Dionisi)
2013: Production of the film "Senza ritorno", which he wrote and directed (starring actors: Stefano Dionisi, Raffaella Rea, Alessandra Arlotti and David Coco
2012 During the festival Viareggio Europa Cinema Alessandro Tofanelli was awarded the Monicelli Prize.
2006: The film, written and directed by him, entitled "Contronatura" and produced by R&C Produzioni (leading actors: Valeria Cavalli, Andrea Di Stefano and Maya Sansa), won the special jury prize at the Europacinema festival and the Nice Festival in New York and San Francisco. The film was shot entirely within the boundaries of the Migliarino-San Rossore- Massaciuccoli Natural Park (location in the province of Lucca and Pisa: Torre del Lago, Lake Massaciuccoli, Migliarino, Tenuta Salviati, San Rossore). "Contronatura" opened the Nice Festival in Amsterdam, the edition of the festival in St. Petersburg, Moscow and Perm. It was finally purchased by Most Media (Russian distribution company). It was declared a suitable film for the art-house circuit.
1997 as part of the Festival Europa Cinema, he made the feature film entitled "Il canto delle nuvole" with a narrating voice by Giancarlo Giannini and music by Federico De Robertis (Nirvana).
1991: he was assistant director in the feature film entitled "Confortorio" by director Paolo Benvenuti.
In 1992 the film participated in the Festival di Locarno.
1986: he was assistant director in the feature film with a subject (made in 35 mm) entitled "The Kiss of Judas" by director Paolo Benvenuti
In 1988 the film was presented at the "Settimana della critica" of the Venice International Film Festival.
He collaborated with the director Francesco Alberti for the realization of a short film for the School of Bassano by Ermanno Olmi.

The most important works are listed below: