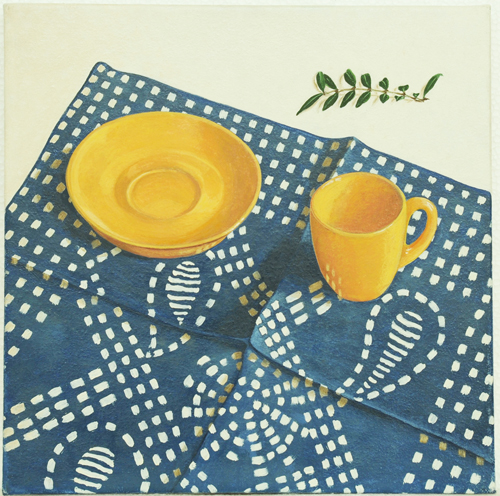 Alma Tancredi, painter of minimal and ordinary objects and still lifes not without pop suggestions, offers her stubborn attention to everyday materials: bowls and dishes, still lifes with succulents and fruits, isolated on a plane that rises up, overturned under the eyes of the viewer, caught from a window overlooking the park surrounding the house.

Alma Tancredi was born in 1975. After graduating from high school with an artistic diploma, she began working as a goldsmith and later opened her own workshop (ororaro) in the ancient Torre d'Ercole in the historic centre of Brescia, where she creates exclusive jewellery inspired by zoomorphic and kinetic forms, including organic efflorescence and tension structures. In 1987 he abandoned the goldsmith's trade for good to devote himself to his family. He exhibited his paintings for the first time in October 2000 at the Ghelfi Gallery in Vicenza, in a one-man show presented by Vittorio Sgarbi, and in 2001 at the Quadra Gallery in Iseo with a preface by Tino Bino. After these first public experiences he continued to paint although he abandoned his exhibition activity. At the same time she posed for long periods for the sculptor Giuseppe Bergomi, whose wife and companion she was, muse and model. Her experience as a goldsmith was invaluable in assisting in the wax work for bronze castings and in collaborating in the various activities of her husband's studio. The current exhibition at Studio Etra in Florence sees her as a protagonist in her dual experience as painter and model: witness to a particular family chronicle, a domestic dialectic between husband and wife, between artist and artist, between sculptor and model, with the intention of making art beyond a purely formal investigation, but which in the intertwined play of gazes contributes to our awareness of reality.