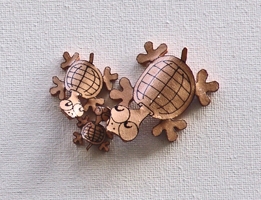 Hitoshi Amemiya exhibited at Galleria Gagliardi from 2010 to 2015.

MICROCOSM. Behind each work by Hitoshi Amemiya there is a big job and an infinite patience. Each microscopic animal or insect made in leather is cut one by one with scissors and knife and hand-drawn with ink, it is really a very meticulous work. But the work of Amemiya is an ironic scale reproduction of insects and small animals, with it A. wants to reproduce the organization of the human race, the many ways to gather and live together, the various social models: nuclei in defense or attack, peaceful or aggressive, or ordered without any adjustment, welcoming or closed and tight to defend their own territory. In this way A. explains our society, he makes the humans becoming small creatures that look very similar to a crawling anthill that we can easily see from our height ; but doesn't even the Earth seen from above seem an anthill? Isn't true that the human nature it is a small and swarming world compared with the immensity of the Universe? The human nature has got lots to share with this microcosm despite the fact that, even if we consider it inferior, probably it is better then our one.