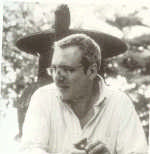 Andrea Boyer was born in Milano in 1956. He was studying science and art. For many years he was working as a professional photographer but later he devoted himself to painting,drawing and drypoint. In 1991 he met Giovanni Testori, who helped him organising his fist exhibition of drawings and etchings in Compagnia del Disegno di Milano and in the next year in the library “Sarmani “ in Milano. Testori wrote also an important text about this show. Boyer had many solo and group exhibitions in Italy and abroad.

Andrea Boyer was born in Milan in 1956. After his scientific and artistic studies, he worked for years as a professional photographer in Milan, before devoting himself exclusively to pencil, painting and drypoint. In 1991 he met Giovanni Testori, who invited him to hold his first personal exhibition of drawings and engravings at the "Compagnia del Disegno" in Milan and the following year at the "Sormani" Library in Milan, dedicating an important critical text to him on that occasion. Since then, his works have been shown in solo and group exhibitions in important public and private galleries in Italy and abroad.