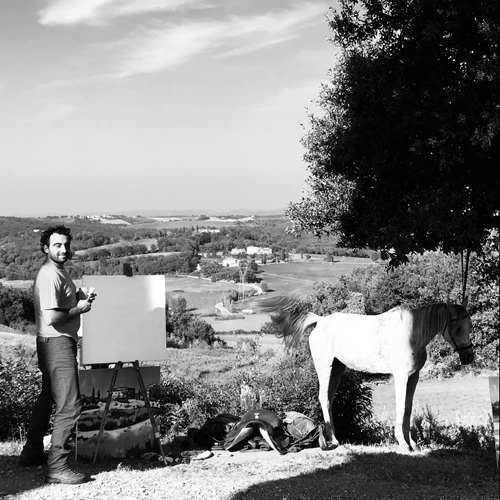 Antonello Plantamura was born in Puglia in 1975, at the age of 16 he had his first solo exhibition, in 1993 he moved to Tuscany, where he attended Enrico Crispolti's art history lessons at the University of Siena.

In 1996 he started to devote himself entirely to art. He lived between Apulia, Tuscany and Sud Tirol, moving often to Rome, Naples, Milan, Genoa, Turin and Venice.

Traveling often he had many friendships, which were important for his inspiration. Through her friends, in 2008 she met and frequented Antonio Rezza, a performer who became ten years later Golden Lion for Career in Venice, who has been a constant support and reference. In recent years she has been attending Vinicio Capossela and his musicians at his festival organized in Southern Italy in the outlying childhood places of the singer-songwriter. This cultural operation, perhaps the best in Italy for conception and imagination, has enriched him with new motivations and friendships, bringing him into contact with the new and lively artistic scene of Naples.

As he traveled in reality, so he traveled in art, radically changing style in each pictorial cycle, deliberately making himself unrecognizable to the public and critics. For this Maurizio Sciaccaluga defined Plantamura as "rhapsodic" already when he was 25 years old. He has always had the need for absolute freedom of expression, aware of the fact that not being recognizable makes an artistic career much more difficult.

He had about 50 exhibitions in galleries, museums and art fairs. The solo exhibition at the Artbreak Gallery in New York in 2008 was a project carried out without his knowledge with the support of Banksy, who among other things, had entirely painted the walls and ceiling of the room of the Carlton Arms Hotel in Manhattan, where Plantamura was hosted for a month. For the opening of the exhibition  there was a crazy performance by Mike Tyler, featured in Banksy's official catalog. In this exhibition Plantamura presented a cycle of large paintings that were used as a background for a video installation, which was then used as a scenography in many concerts, including that of Paolo Fresu for the inauguration of the new Teatro Forma in Bari, and in a well-known television program.

In the various catalogs, including that of the exhibition at the Gallery of Modern Art in Genoa, he is present together with many artists already historicized including Christo, Arman, Bernd & Hilla Becher, James Brown, Cai Guo-Qiang, Peter Halley, Hans Hartung, Jason Martin, Kenneth Noland, Thomas Struth, Philip Taaffe, Spencer Tunick and many others.

20 years later, in 2019, for the 500th anniversary of Leonardo's death, the Tuscan Government invited him in an exhibition with the Lucan Portrait, a painting found in 2008, identical to Leonardo's false self-portrait which is located in the Uffizi in Florence. The scientific analyzes made by many universities around the world have dated the work to the beginning of the 16th century, and have made it possible to discover the Leonardo’s fingerprint imprinted on the fresh color, proof that, together with many others clues, is pushing more and more experts in the world to consider this painting the original self-portrait of Leonardo, especially after the publication of the best seller on Leonardo by Walter Isaacson, former president of CNN, and after the release of a documentary distributed throughout the world, titled “Leonardo Da Vinci: The Mystery of the Lost Portrait”, in short version on Youtube.

The type of assembly of The Lucan Portrait is more unique than rare. Plantamura, taking an interest in this painting, found in a Leonardo’s Code a drawing that depicts the identical type of assembly, and in that page Leonardo explains how to prepare a board to paint. This discovery, among others that Plantamura made on Leonardo's self-portrait, was considered by the experts, among the most important evidence of attribution found in the studies conducted, from 2008 onwards, by many universities, including those of Los Angeles and Oxford, the most authoritative venues for Leonardo's studies. For this reason Plantamura has recently been known and esteemed by important art historians in Italy and in the USA.

Fast in the laying of the open and generous brushstroke, Antonello Plantamura's painting offers an emotional rhythm of images and verses.
Contemporary storyteller observes, explores, indignantly attacks, denounces injustice, horror, lies, and exasperates the noises and silences of nature with audacity and ardour.
His work is fundamentally characterised by two expressive quests that manifest themselves in two different techniques, oils on canvas and bitumen.
A doing full of energetic sap, of electric movement, that draws nourishment from nature (the oils on canvas) and a darker, more spasmodic doing that develops from his observation of the social (the bitumens).
In these latter, made with the youthful impulse of protest, the aesthetics remain disjointed to leave more room for provocation.
In Antonello’s bitumen abound information about being and the representation of the self, found objects, excerpts of poems, popular songs, which appear, almost encrypted in the noise of blacks and blues..
Attentive observer, Plantamura exasperates the human soul and the piety dilating the points of affection to the things. His overwhelming feeling is pure, dictated by an acute illness of existence that imposes itself with pictorial torment.

- Sketches for the Palio of Siena, Museum of Palio, Siena

- Le bucoliche al telescopio, based on poems by Alessandro Fo, with the author reading, Siena

- From Manhattan to Montaione, curated by Cora Breckenridge, Montaione

In addition to many articles in newspapers and websites, and television news, he has had the following publications:

In May 2003 Plantamura  is reviewed by the monthly magazine “Arte Mondadori”.

The University of Foggia (Apulia) aquired two of his works for the “Pinacoteca Universitaria” foundation, published in University Catalog.

For the Liberacollarte event in 2006, the Municipality of Colle Val d'Elsa chose one of his paintings for the posters that were posted in Tuscany

Loescher Editions picked one of his works as book cover for the student workbook‘ Lo specchio di carta’.

Art curators who wrote of his work: