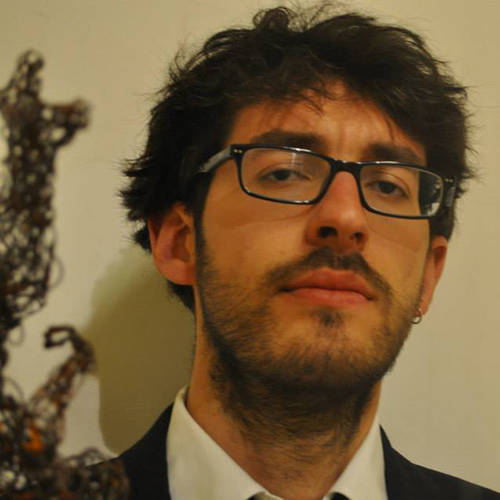 Antonio Barbieri exhibited at Galleria Gagliardi from 2012 to 2016.

Antonio Barbieri, was born in Milan in 1985. He graduated at the Accademia di Belle Arti of Florence, section sculpture, in 2010. During his education he worked in art studios studying the less know sculpture technique like the wrought iron, fibreglass and cement. In the same years he became the assistant of the sculptor Cristian Biasci who groomed him to the scenography for Opera and Modern Theatre. In 2009 he was selected for making the Monte dei Paschi di Siena prize for the international cultural event Danza in Fiera. In 2011 he organised a charity project for the foundation "Il Sole", making chalk portraits of the 14 guests of the community created by O.n.l.u.s. and, same year he designed and made the scenography for two theatre shows for the Teatro Stabile di Grosseto. La Nuova Era (Certaldo 2009), Waste (Milano 2012), Vivere in Italia (Grosseto 2014), Sublimazione Inversa (Chiesa dei Bigi, Grosseto 2015), How to disappear completely (Milano 2015), Winner Projec FUORI (Berlino 2015). In his artistic research the fixed point is the figure that is characterized by an intense formal research, using poor materials and techniques belonging to industry and the three-dimensional design. The metal becomes flesh or textile and that tries to emulate the natural shapes in a constant research of the balance. He has always been fascinated by the tradition of the portrait researching materials and techniques that allows him to catch the reality and its different gradations. Trough his work he tries to contrast the vibrant and dynamic feeling of the iron tangle with the calm, still subject that he represents.