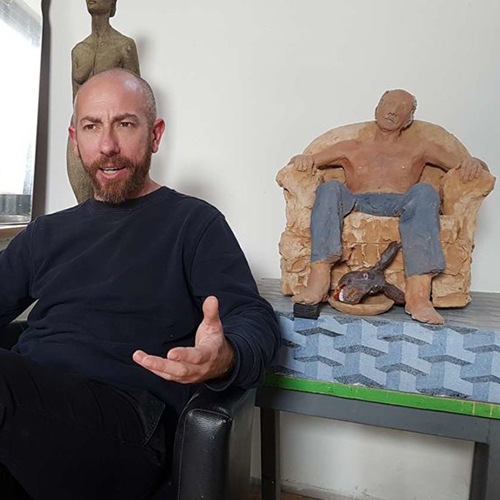 After graduating from the Art intitute Guidizzolo (MN) in 1996, in 1998, he obtained a diploma of Master of Arts.

In 1976,after completing his artistic studies at the Academy of Fine Arts in Verona in the sculpture section, he began working at the laboratories of the Arena di Verona as a sculptor and set designer for operas.
After working for years in sculpture laboratories and art foundries, learning techniques such as wax modelling, silicone moulds, plaster moulding, cold patinas, marble sculpture and clay modelling, he began working independently as a sculptor, creating numerous works, including monumental ones, for squares, churches and private clients, using a wide variety of materials such as clay, marble, bronze, wood and resin.

In the academic year 2002-2003 concludes, at the Academy of Fine Arts "C.B. Cignaroli "of Verona, the fundamental and complementary courses of the school of sculpture and in February 2004 he graduated from the same institute. In the same year he joined as a scenographer sculptor for Opera Verona where he remained until the following year when he opened his first sculpture workshop, from that moment begins a dense work and exhibition activity. His works are part of private and public collections, in Italy and abroad. In 2006, he ranks first in the "Proposal for young artists in 2006", organized by the Fondazione Toniolo, Association of Friends of Don Angelo Marini.

Since 2008 works with Galleria Gagliardi San Gimignano (SI). He collaborated in the context of several design competitions and is currently involved, among other things, in the creation of works of art of a new Church in the Archdiocese of Ugento (LE). From 2015 teaches "sculpture for others" at the Academy of Fine Arts in Verona.

His sculptures are characterised by the perfect balance between the strength and lightness of the material, be it terracotta or bronze. Biondani plays with the surface of his sculptures and generates imperceptible vibrations and movements that animate the inert material. The presence of his sculptures, even the smallest ones, becomes a vital reality. The figures playing with the coat are the current maximum synthesis that Nicola Biondani's art has achieved. Slender figures, slender bodies enveloped in a mystical silence realise what Walter Benjamin called the dimension of the aura: the sudden appearance of a distance. In this cycle, the gesture of playing is what allows us to unhinge the mechanical effect of reproducibility. The game is linked to the rules, but it is also what makes it possible to overcome mere mechanical repetition in order to keep the fertility of chance continuously open. In this way the case produced by the game is born from simple and pure creativity. The characters with the coat play with the garment dear to Gogol and to the zealous clerk Akakij Akakievic. What emerges is a silent, plastic dance that reminds us of the cycle of Sumo wrestlers, and the ritual gesture of the game is to exceed them where they could not reach: the freedom of time and chance.

Nicola Biondani's sculptures own two distinct souls. Aclassical one, permeated with history, born from Medardo Rosso and Marino Marini and a modern one, filled with allusions to the complex patterns of contemporary living, the incommunicability and daily grind, the winding mistrust towards the future. Two souls which mirror through the interplay between the inner monumentality given also to the smallest works and the human tremble of their glances; between their totemic posture as if they were contemporary idols and their being captured while doing simple and daily activities. They are travelers who got lost around the world. Sometimes they sit exhausted on their suitcases, on other times they seem to have escaped from an unbearable condition, otherwise they wear a winter coat as an armour against the world.