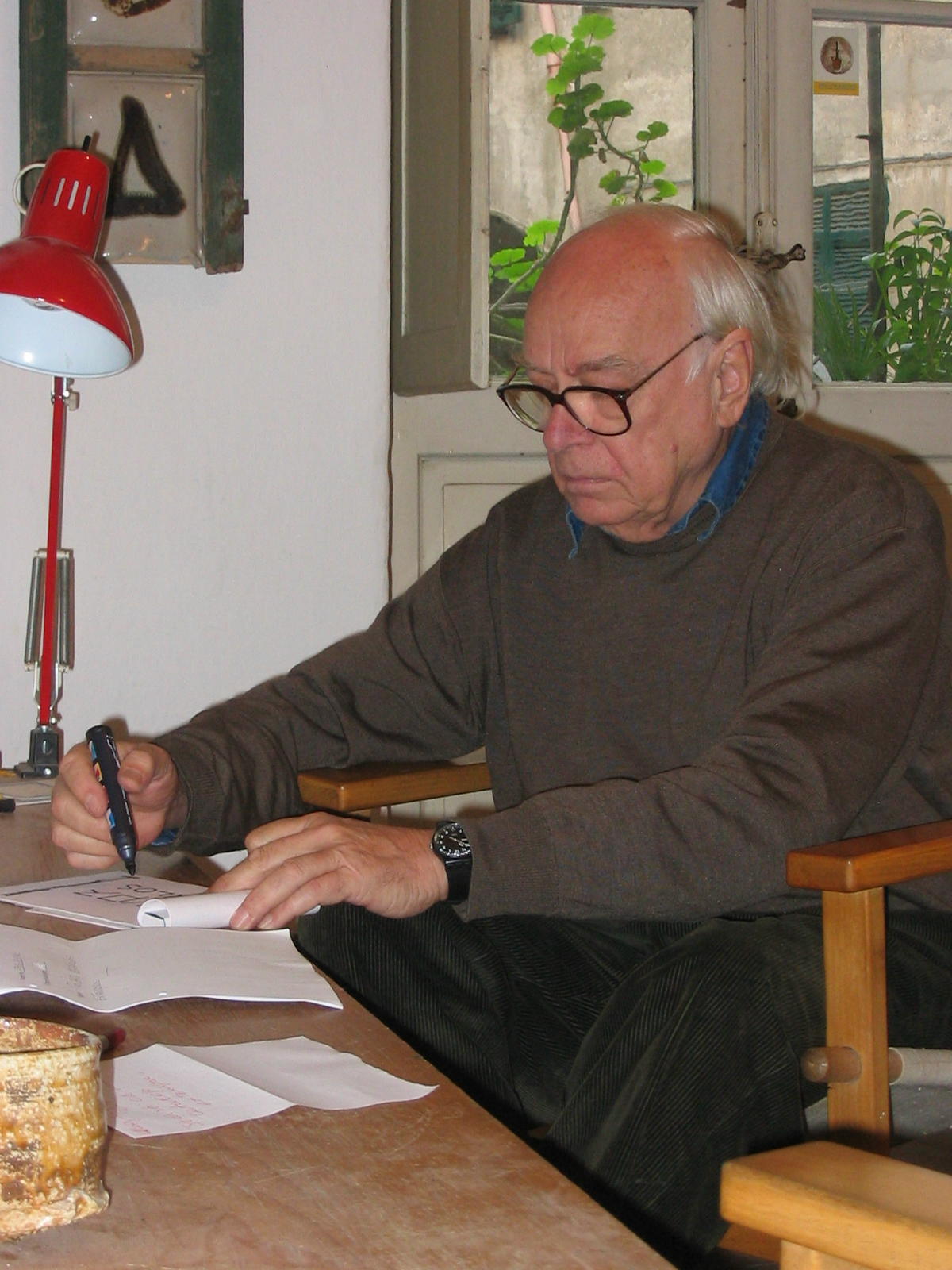 Carlos Carlé exhibited in Galleria Gagliardi from 1993 to 2015.

The content of the work of Carlos Carlè has its rootsin a sort of anamnesis, in the research of a both far past and present. For this reason it arouses ecoes of unknown memories of a dense world without time. The capacity of evocation exercised on the audience is peculiar of the great works of art. How can Carlos Carlè influence us to such an extent? The answer is the same for all the artists who have a place in the history of art. He can melt the sense of form, of colour and of technique in his works which are based on two primary geometrical figures: the plane and the sphere. He works the surfaces of the figures with a great wealth of details. The "skin" of the stoneware turns into a microcosm where the colurs of earth, glazed in gray anthracite or dull tones, play with the relief and, at times, with a blue tone full of astonishing poetry. Both the big and the small pieces express an athmosphere of restrained monumentality, a severe and fine sense that makes them one of the poles of attraction of European ceramics today. Trinida Sanchez-Pacheco Director of The Ceramics Museum-Barcellona

The ceramist Carlos Carlé was born in Oncativo, Argentina, in 1928 and was introduced to ceramics at his father's refractory factory.
In 1938 he moved with his family to Buenos Aires where he attended Ana Burnichon's art and ceramics studio.
During these years he began to participate in exhibitions and events in Argentina and Europe, travelling through France, Germany, Denmark, Holland, Belgium and Czechoslovakia.
He approached ceramics professionally in the early 1950s, in 1954 he was one of the founders of "Artesanos", an avant-garde group in Argentine artistic ceramics, and in 1959 he founded the Argentine Ceramic Art Centre.
In 1961 he was awarded a Gold Medal at the Contemporary Ceramics Exhibition in Prague.
In the first half of the 1960s he came to Italy and from 1965 he worked at the "C.A.S." (Ceramiche Artistiche Solimene) factory for the production of artistic majolica. (Ceramiche Artistiche Solimene) in Vietri sul Mare.
In 1967 he won an award at the 3rd International Competition for Ceramics and Sculpture in Rimini.
In the following years he made several visits to Albisola, where he met Wilfredo Lam.
At the beginning of the 1970s he settled in Albisola and worked at the "Ce.As.", "Ceramiche Isola" and "Pacetti" factories.
In the early seventies he took part in the most important Italian and European ceramics events, exhibiting his works at the International Contemporary Ceramics Art Competition in Faenza and at the Biennial Ceramics Art Exhibition in Vallauris, France.
He later opened his own workshop and in 1972 he won a gold medal at the XXX° Premio Faenza.
In 1976 he was awarded first prize at the City of Caltagirone Ceramic Exhibition and in 1981 he was awarded by the Calabria region at the 2nd Biennial of Ceramic Art in Reggio Calabria.
In 1982 he was awarded a gold plaque at the 22nd International Ceramics Competition in Gualdo Tadino.
In 1986 he was commissioned by the architect Schizzi to make a large polychrome majolica disc to decorate a residential building in Lavagnola, near Savona.
In 1991 he won the Suzzara Prize and in the following years was invited several times to exhibit in Japan.
During these years he created some works at the Albisola factory "Fabbrica Casa Museo G. Mazzotti 1903" of Bepi Mazzotti; in 1999 one of his works became part of the works kept in the Mazzotti Museum Garden.
In 1997 he was one of the teachers at the First Professional Course for Ceramists in stoneware, a technique of which he is a master, and in the same year he received the "Oscar della Ceramica" award from the Museum of Contemporary Ceramics in Albissola Marina.
Carlos Carlé died in Savona in April 2015.

The voice of the Earth

There are moments in which we need to stop and listen, listen to the voice of the heart; there are some instants that we must recognize, precious instants in which feelings appropriate of the being and fill the heart, instants in which we must exclude the voice of the reason, the noise of the world;
to listen.
I don't look at the works of Carlos with the eyes of the mind, I like to touch them as I like to caress the bark of an old tree; I listen.
The voice of the Earth, through his works, Carlos Carlè, allows the earth to communicate.
In front of these sculptures of primordial forms and of an austere and proud presence I let me transport by the emotion and I come into contact with the earth, with her colours; arid deserts, deep lakes, springs of alpine water, barks of secular trees, the terrible colours of the burnt forests, the asperities of the rock, eruptions of volcanoes, sour sod in dry fields.
These works made of clay, water and fire, speak about themselves, they attract us inviting us to penetrate in the soul of the earth.
They are sculptures that have open hurt, deep lacerations, as the earth, but we don't feel a cry of pain, there’s not suffering.
In them we feel the quiver of an internal life, of lifeblood, of dynamism.
Works even marked, they seek the freedom of a proper space of a proper life.
Works of so intense poetry that excite me deeply.