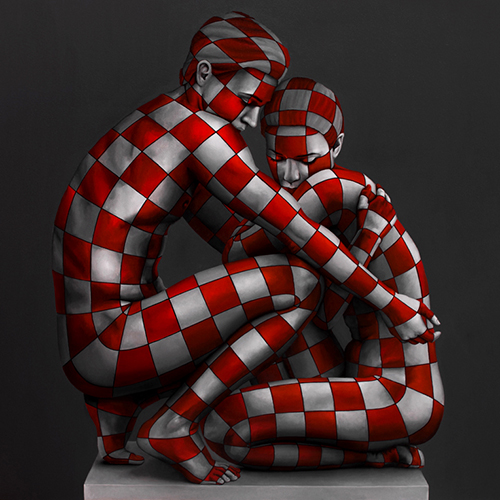 He started drawing by pencil at the age of 5, and never stopped since then. In September 2009 he started his career as professional artist.

Danilo Martinis has an important background of research and stylistic evolution behind him with an initial interest in Action Painting.

In 2005, Martinis evolved his style with a new form of expression inspired to OP ART, the Optical Art Abstract art movement born in the ‘60s and tied to the Kinetic Art movement which aimed at giving the viewer an experience of an optical illusion and of perceptual instability (Vasarely, Rilely…) where the human figure isn’t considered.

Martinis, however, interprets the Op ART in a personal way, introducing faces and figures that are mostly female and drawing their bodies so that curves and straight lines intersect, transforming them into figures suspended or immersed that merge with the background of the painting and create a perception of concave/convex, as if they were in continuous movement.