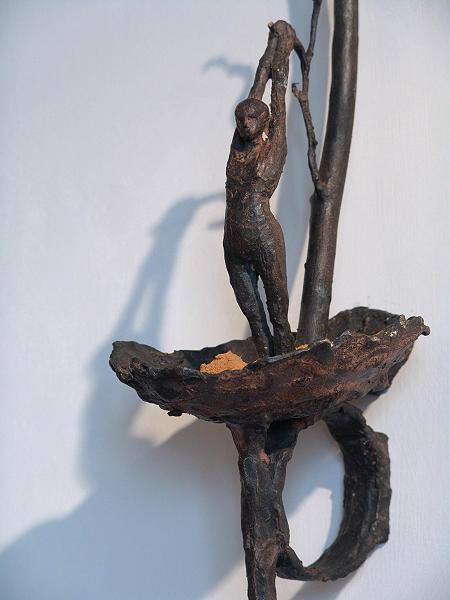 Dario Goldaniga exhibited at Galleria Gagliardi  from 2007 to 2010.

Works that speak of quiet presences, of watchful waiting, of suggestions. Sculptures that challenge the intrinsic heaviness of the material, presenting themselves in an elegant suspension. With Dario Goldaniga's sculptures you enter an enchanted world where figures set among branches or in impossible structures live their own existence in an interminable and meditative waiting.

In his works he uses slate slabs and scraps of bronze casting used in previous works, as well as recycled materials that the artist rescues from destruction, reinserting them into the circuit of artistic production. Goldaniga uses what he has at his disposal, what he finds in the immediate surroundings of his experience, to make it the object of a transformation (and a transmutation) that we can only reductively define as "aesthetic", but which, instead, concerns the development of a more holistic vision of the cosmos and nature.

Sculptures talking of quiet presences, watchful expectations, suggestions. Sculptures challenging the intrinsic heaviness of the material and presenting themselves in an elegant suspension. With Dario Goldaniga sculptures we enter in an enchanted world where figures set among branches or impossible structures live their existence in a never-ending and thoughtful waiting.

The positive meaning that underlies the works of the master Dario Goldaniga is woven into the fabric of a concept that has become a project and then a material, to condense into a message in the finished work.
Marshall McLuhan taught us that the medium is the message and it is in this concept that the extreme contemporaneity of Goldaniga's work is exemplified. The artist chooses to use elements left over from the lost wax bronze process, known since the ancient Greeks.
Dario Goldaniga, GLOBE, 2019 BRONZE ON STEEL DIAMETER CM. 70
Inside a terra cotta mould, there is a wax sculpture, which melts when liquid bronze is poured in. Among fumes, vapours and lapilli, the incandescent metal fills the mould as if it were a bottle, until it comes out and then cools down.
The excess parts, which cool rapidly in the air, are twisted, sometimes very burnt and dark, other times the colour of gold or green like oxidised copper. Dario Goldaniga, by selecting these very fragments of unfinished works of art, allows them to enter a new composition, a new creation, giving them a second chance and finally allowing them to sublimate into a work of art.
As in a slow distillation process, he selects the fragments he has available. They are an enormous number of metal pieces, each with its own shape, its own image, unique and unrepeatable. They may have coagulated in the last few months or in the last five or six years, or maybe more.
Dario digs among those metal stones, choosing not whatever comes to hand, but the precise thing that interests him. Once all the fragments have been sifted through and then examined, the new image takes shape and becomes a new work by the artist.
The pieces examined individually may present dissonances, diversities or very strong similarities and resemblances. But the final effect is never disharmonious, because there are no clashes.
DARIO GOLDANIGA, WORLD MAP, 2019 BRONZE CM. 90 X 160
Working instinctively and intuitively, Goldaniga's emotions play a fundamental role in the entire creative process, and it is good for ideas and thinking: a contrast that generates creative sap and courageous reflections. His sculptures range from planispheres, stars, animals and globes, all images belonging to the natural world.
The critic Ivan Quaroni wrote of Dario Goldaniga: "Like the bricoleur of Claude Levi Strauss, the anthropologist who wrote The Savage Thought, Goldaniga uses what he has at his disposal, what he finds in the immediate surroundings of his experience, to make it the object of a transformation (and a transmutation) that we can only reductively define as aesthetic, but which, instead, concerns the development of a more holistic vision of the cosmos and nature".