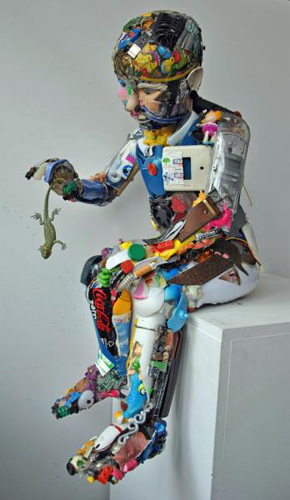 Dario Tironi was born in Bergamo in 1980.

He received a degree in sculpture with first class honours at the Brera Fine Arts Academy in Milan in 2006.
His work has been displayed on many occasions both in individual and collective exhibitions.

At the end of every day, all of humanity has contributed to creating artificial mountains of garbage, which we find covered with huge sheets of canvas, buried underground, along the roads we usually travel, along riverbanks and in seas. We come across them where all we would like to see is unspoiled nature. This is our reality! Our everyday life, which we create by buying things, consuming them and then throwing them away. A race to buy things, many of which are useless, created with the aim of deceiving us into believing that they will improve our life; objects that are modified constantly to improve their functions, resulting in the serious problem of disposing of an enormous volume of waste. Trash that Man wants to distance himself from, to be hidden where he can’t see and can’t smell it; he wants to live in clean, sweet-smelling environments. He too must smell good and this opens up the way for the enormous amount of shampoo, deodorant, household cleaners, degreasers and washing powders that wash whiter than white. This consequently creates more and more empty boxes and containers to swell the mountain of waste.

Bruno Munari crystallized in the resin waste of equipment, mechanisms and magnetic materials: "Archaeology of the Future" Big game for the archaeologist of the 6000s. Vere Gordon Childe, a famous archaeologist, wrote in the late '50s: "The loose bolt that fell out of my car this morning, the sardine tin, which I carefully buried after lunch at Esher Common, and the crater left by a German bomb are archaeological data just like the bay leaf blade, broken and thrown away by a Solutrean deer hunter ... The archaeologist of the 6000s might interpret bolts, sardine tins and bomb craters as documents indicative of the type of vehicle used on the roads around a big city, of the habits of some of its citizens and of the actions of some unknown enemies ... These are the things that archaeologists are interested in... human actions and thoughts". Waste recounts and tells our life, our habits. Dario Tironi and Koji Yoshida make sculptures from this waste.

A work of painstaking restoration, cataloguing objects, functions, forms, colours, materials and bringing them back to life, recycled in works of art. This is how the sculptures of these two young Artists come to life, figures that at first glance, may seem ingenious and imaginative sculptures in bright colours, clever and playful toys for adults, one-off works created like a composition of the famous building bricks made by LEGO. Made with the codes of our era, they testify and report, reflecting the image of our civilization: we are what we consume, from morning to night our every need is accompanied by a wrapper, packaging, food and objects that, once they have satisfied us, we want to throw away and reject. Sculptures made from things: observing them, each one of us can recognize an object or part of it which we have owned or used during our life.

Tironi and Yoshida also lead us to another point, encouraging us to think about how mankind is contaminated by technology and how we can no longer do without it. Videogames, computers and mobile phones belong to us and, even now, the progress of bioengineering has generated discoveries that correct the functioning of organs or replace body parts with transplants and implants of chips, pacemakers, artificial valves and limbs. The human being takes possession of the objects that he creates, and he feeds on them, using them to replace his own “broken” parts. The bionic man is not science-fiction, he is already part of our very near future and this will surely change the perception of man, his nature and his feelings.

The works of Dario Tironi and Koji Yoshida are sculptures but also entities that, motionless, with their objective reality, want to make us reflect.