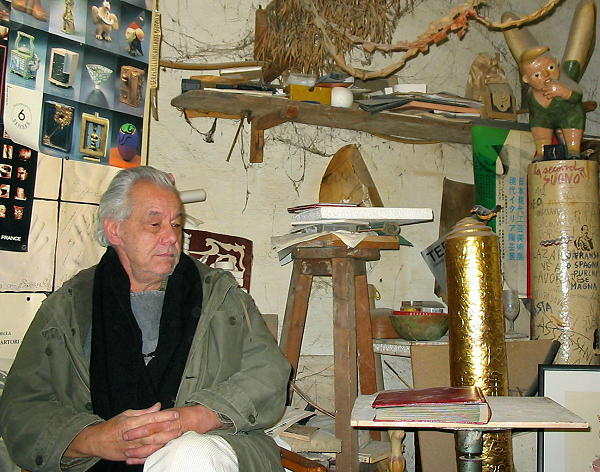 As an artist, Bonaldi is like an old traveller who, instead of writing his impressions in a notebook, picks up the clays from the places he visits. Then, in the workshop, comes the fanciful work of assembling the different clays and culptures and fusing them into a single work. A ceramist who works uninterruptedly, he manages to fly over the whole world metaphorically from his workshop, along the river Brenta. The Culpture of a people, the memories of our past and rural wisdom are translated into allegorical forms, often monstrous, at times defaced almost by slogans fromtoday's world which have become reasons for being, as if to say: "We can become what there was before us". As a result, every clod of earth, even the smallest piece of clay for firing, has got years of work behind it, years of the fatigue of the men who walked on top of it. But it is also imbued with the festive moments, the colours of joy, the variety of the seasons, and the light of the darkness peopled by strange figures.

The sculptor and ceramist Federico Bonaldi was born in Bassano del Grappa (Vicenza) in 1933 and attended the Institute of Art for Ceramics of Nove, pupil of Andrea Parini, and completed his training at the Institute of Art in Venice. He began his activity as a ceramist around 1950 and participated in numerous exhibitions in Italy and abroad, contributing, together with Giuseppe Lucietti, Pompeo Pianezzola and Alessio Tasca, to the renewal of Venetian ceramic tradition. In 1957 he opened his own laboratory in Bassano del Grappa and in the early sixties he began to obtain wide recognition both in Italy and abroad. In 1964 he presented some of his artworks at the Venice Biennale of Art. In the eighties, in his studio in Bassano del Grappa, he made works, in refractory clay, porcelain and stoneware, eminently material that, thanks to an unscrupulous use of techniques, reach effects of surprising polychrome. Listed among the most significant ceramic sculptors, who has established themselves since the '50s at the Venezia Pavilion of the Biennale, he is known throughout Italy, Germany, France and, above all, in Japan. He has participated in numerous exhibitions in Italy and abroad. Besides being kept in numerous museums, his artworks have been published in the prestigious volume "Italian Ceramics of the Twentieth Century" published by Electa and edited by Franco Bertani and Jolanda Silvestrini. In 1996 the municipal administration awarded him the culture prize Città di Bassano. In 2011 he was one of the protagonists of the 54th Venice Biennale of Art, with artworks exhibited at the Italian Pavilion at the Giardini and at Palazzo Grimani. Federico Bonaldi, also known for his "whistling ceramics", was active until the last in his laboratory in via Colomba and died in Bassano in 2012.