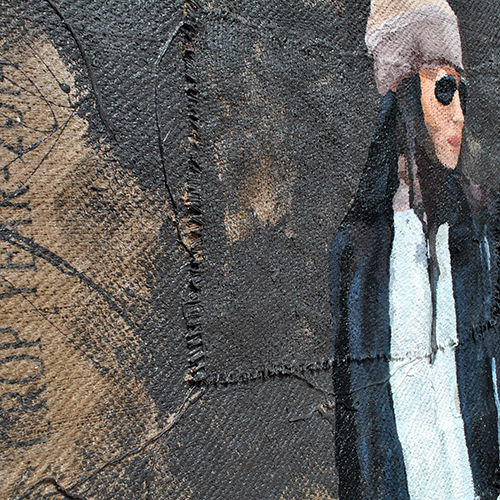 Gianluca Resi exhibits in our gallery from 2018.

There is no longer a star to imitate each of us is a star.
"Icons" whose works on coffee bags on which Resi paints images of faces (selfie) or life compositions. The contrast of acrylics with enamels tends to underline the contrast of the individual with the reality that surrounds it, the lack of details of the scene causes the eye to fall back only on the ground, giving that feeling of loneliness that is filled from being observed by others. the backgrounds of glazes with its castings without geometries, contrasts with the scene depicted, that feeling of calm in contrast to the chaos, typical of social media.
His subjects are ordinary and they come from everyday life; a friend standing in a room, a woman's face or one dancer who dances in her solitude. Through these explorations Resi found a perfect way to evoke the feeling of photography in painting without ever trusting to photorealism to evoke the illusion of reality in two and three dimensions.

Gianluca Resi (born 1966 in Naples, Italy), although he is the grandson of Mario Penelope, an art critic and President of the Venice International Biennial of the Arts (1972), only approached the world of art at a late age, preferring to devote himself to the family business of importing coffee. The coffee sack would later become the point of union between his two lives, his entrepreneurial and his artistic life, and the artist appropriated it to make it an integral part of his latest works. These works encapsulate the artist's entire career, revealing his source of inspiration, his search for the myth as man. In fact, in his search for myth, in 2012 Resi began a typically American pop-art production, drawing inspiration from Andy Warhol, depicting icons from the world of fashion, cinema and entertainment, evoking the myths of the second half of the 20th century. But this glossy world soon found itself in antithesis with the inner path of the artist, who felt the need to tell his story, deciding to go back to his origins, so he began to use coffee sacks as canvases, initially marked by large scars, stitched in the shape of sutures, representing the suffering of men and the readaptation to life. Thus began the production "Scars of the Soul", a collection of six works, where the homeless are the protagonists, no longer the stars of the show, at the centre now is man and not his projections. This work involves him to the point of becoming an "Apocalypse Opera" show, with an innovative format, in which the works come to life through free arts: painting, music, dance, acting and video installations. A four-handed artistic journey, together with the artist Diego Santanelli, which aims to represent the Apocalypse, the battle between good and evil, as a conflict between the army of Satan ("all those who are marked with the number of the beast"), our society, which is now totally codified, and the army of good, angels disguised as clochards. Following the production of the show, Gianluca Resi began to analyse today's society, the popular masses that chase after artificial stereotypes, leading him once again to confront American pop-art, but delving into the other side of a fictitious reality, steeped in superficiality and exteriority. This led to the "Evolution of the Myth" project, in which the artist traces the progress of the myth, its transformation over the centuries, but always preserving its origin: immortality. In his examination of myth, the artist does not neglect its origin, where it all began, through the gift of the word, the richest source of information in human history. In fact, myth is nothing other than the word; it can be considered a sacred tale that reveals mysteries and provides answers to many of mankind's questions. The word, the gift that the muses gave to men, daughters of Mnemosyne, Memory, which allows men to remember, to narrate how the world and men originated. The artist pays tribute to these mythological figures by depicting them as dancers, since their stories dance in people's minds. The muses also recount the exploits of men who have become immortal heroes, the hero becomes on a par with the divinities, figures with whom men tend to identify (Gilgamesh, Theseus, Icarus). Man becomes immortal, the centre of the world. Thus in his work, Gianluca Resi returns to confront pop-art, the myth that becomes consumption, just as in the second half of the twentieth century, heroes give way to those who in the collective imagination become myths, models to be inspired by, the myth thus becomes tinged with superficiality and exteriority. Poetry, which has always accompanied the myth, is also transformed, becoming a logo or a slogan; there are no deeds to narrate, it is man who becomes a myth for what he is. This is how Resi comes to the conclusion of his journey, the myth of today, now that society no longer celebrates only the stars, but also ordinary people, there is no longer a star to imitate, the star is in each of us. Today we are inundated with images of everyday life through social networks, looking for that like that can give each of us that moment of fame, so as to feel immortal, the myths of tomorrow. The artist thus begins a production of images of faces or compositions of life, the subject of which can be imagined as they are painted. Resi's subjects are ordinary and come from everyday life: a friend standing in a room, a woman's face, the loneliness of waiting. In this way Resi has found a perfect way to evoke the feeling of photography in painting, without ever relying on photo-realism, to evoke the illusion of reality in two and three dimensions. Gianluca Resi captures the moment: the here and the now.