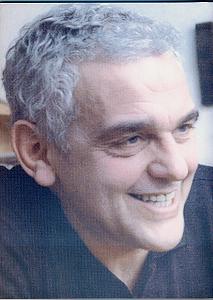 Thanks to their character,these terracotta figures are redolent with memories and modernity,thanks also to their slightly enigmatic appearance,with a hint of irony and disarming ingenuity.The subjects (which, most of the times are female adolescents) appear to claim back a life which is on the borderline between an affirmation of their own individuality and an inclination towards oneric momentum. Thanks to their dreamlike quality,the faces and the shapes of Carotti's creatures are in fact sets on a spiritual plane where the winds of history meet the immediacy of matter,which has been shaped in such a way as to generate a repertoire of characters engaged on the stage of an imaginary theatre. These characters interpret a range of options which are as varied as the range of moods with which the artist interprets his relationship with the world: unacknowledgeable wonder and ineluctable bewilderment,passionate attention to a tuning with reality and determined distancing from day-to-day life which enables the artist to identify its contradictions and its worries Carotti's pieces originate from a need for assertion in the convergence between their pictorial ''skin'' (nearly all of them being polychromatic) and the body shaped from the union of anatomic joints and movement ability,revealing their soul in its innermost expression;these creatures represent the creator's psychological impulses, even when these are revealed through the magic emanating from their positions of expectancy or awareness of their own being.This could lead to their interpretation as alienated voices of a secret microcosm within which,with every pulse of the most diverse stimuli, the viewer can measure himself or herself with the value of a symbolic aspect which is congenial to him or her.

Born in Cremona on 17 July 1946, after graduating as an Industrial Technician he continued his studies at the Venice Academy where he graduated in 1971. Over time he acquired various artistic skills working as a restorer of antique paintings, set designer, actor and puppeteer (puppet maker - direction - acting). He has held numerous personal and collective exhibitions, both in Cremona and the surrounding area, and at national and international fairs. His main group exhibitions include: the 3rd Biennial of Sacred Art at the Bishop's Palace in Cremona in 1994; the 4th and 5th editions of the Padana Art Biennial in 1995 and 1997; his personal sculpture exhibition "Oggi è lunedì, anzi ti amo" at the Cremonese Artists' Association in 1999. He took part in the art fairs of Parma in 2001, MIArt Milan in 2002, Padua in 2003 and Lugano in 2004. After the critical success of the exhibition 'Ecce Homo', organised together with the painter Angelo Bertolini at the Baptistery of Cremona in 2005, he received numerous awards for his work as a sculptor. In the meantime, his personal exhibitions continue: "Venerdì 17" at Bontadosi ArtGallery in Montefalco and "Tra Luna e Grammatica" at Palazzo Trinci in Foligno in 2011. At the 59th Venice Film Festival, her work "Noli me tangere" represented the prize offered by the Ministry of Equal Opportunities, awarded to the film "A simple life" by Chinese director Ann Hui. She took part in the collective exhibition L'arte non è cosa nostra, curated by Vittorio Sgarbi, at the Sala Nervi in Turin Exhibition Centre, an initiative promoted by the Italian Pavilion of the 54th International Art Exhibition of the Venice Biennale for the 150th anniversary of the Unification of Italy. In September-October 2013 the personal exhibition "Trattando l'ombre come cosa salda" (Treating shadows as a firm thing) was organised at the Complesso Monumentale Sant'Abbondio in Cremona.