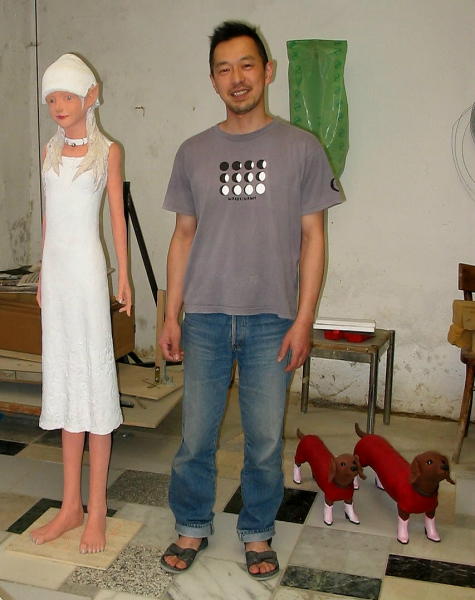 Hiroto Kitagawa exhibited at Galleria Gagliardi ​ from 2004 to 2077.

Hitagawa's work is constantly on the edge of ambiguity.Ambiguos"par excellence" in that Hiroto's heads and sculptures are hybrid,with no defined identity of their own.His style is both ironic and grave,unabashedly mixing shyness or inferiority complexes with themes and characters from the great shool of the Japanese manga with the mark and the materials of the Italian and European shool. His favourite subjects are girls who seem to step out of a Japanese manga,with a few touches between fantastic amusement and technological novelty,his male characters are half adolescents and half B class super heroes from comic strips.A combination of realism and pop amusement,showing accomplished technique which harmonises the roughness of the natural terracotta and the brightnessof the enamels. Whatever the context,Hiroto's characters are inevitably outsiders:exceptional outsiders in the serious world of the classic Italian tradition,outsiders in the cold,glassy field of contemporary installations,not very open to artists who pay too much attention to the materials,the style and the use of old or excessively refined techniques like terracotta; inevitably outsiders in the comic universe too.In the latter case,like strange ghosts suddenly materialised out of drawn pages or the evanescent consistency of videos,the characters are destined to live out their existence merely replicating the more characteristic expressions or the more prominent physical features.

Hiroto Kitagawa was born in Shiga prefecture in 1967. After graduating from the Kanazawa College of Art in 1989, he travelled to Italy, inspired by figurative Italian sculptors such as Marino Marini. Kitagawa studied at the Academy of Fine Arts in Milan and Carrara, where he was trained in traditional terracotta sculpting techniques. Since his return to Japan, Kitagawa has been a consistent exhibitor of sculptures both in Japan and overseas. Kitagawa’s works use acrylics to add life to the most primitive of media –clay – in order to depict people living in the present day, with some of these works featured at an exhibition at the 21st Century Museum of Contemporary Art in Kanazawa.