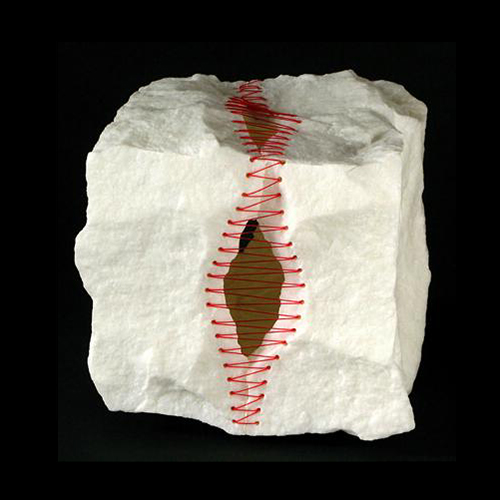 Kenji Takahashi exhibits in our gallery since 2000.

"All things change shape with the passage of time and natural modification. The crack created on marble by a blow of a hammer can become one of the elements of the primary form. I would like to represent the inevitability of the relationship between cracking and repeated stitching on marble. I think that splitting marble is a liberation of the physical, reconstructing it is a mental meditation".  Kenji Takahashi

The form is unaware of adjectives, brim toward the dismissal of every meaning: yet achieved through an irritated composition of sensibility made by elements of marble that know the fracture, the imperfection the waste and the following reassembling (rather the side re-stitching). The everything, however, left in sight, almost to exhibit the used materials and the procedure put into effect; and also, busy to un-strengthen the idea of perfection, to devalue the illusion of the totality. Resonance, therefore, of the thought Zen, in the work of the Japanise Kenji Takahashi: constructions of discontinuous and open worlds framed by the void and not void framed, physiological ambitions of space, but of a space that invariably loses its place, that loses its centre: finally adventures of a subject worked by the break and by the subtraction. But the true sense of the sculpture is there, in that continuous trauma, in that broken event, in his exist-not to exist. It doesn't concern however the elaboration (all western!) of the mourning, but really of the presentation of an endless origin, of the practice of the concise language, as if the everything was inexpressible or as if could still be said always something. The same fragments that structure the sculpture are not to read him as separations, but as added; signs that deny the definition for an further (of a void) that it allows the look to penetrate and of "to create him" its height.

In front of a marble’s block, the sculptor places himself in meditation and in an interior communication, gets a glimpse of its form, jealously imprisoned by the material,
gradually removes the first scales, smoothes it, until the structure is outlined, again he digs, follows the veins, following the mass, until it emerges like a Venus from the water.
This is a work that normally aims to create an artistic product, which beauty is intrinsic: we look for its elegance, the smoothened material, the forms’ balance; exciting and involving works of which we only see the surface.
Looking at Kenji Takahashi’s works we have a different impression.
In front of them we get amazed and surprised, impressed by the sight of a work that arise from a crashed material.
His results are complex and own different implications and interpretation keys.
In each artist there’s a lot of the man, in every work he pours his history, his experiences, his fears as well as his expectations, dreams and joys.
Analyzing Takahashi’s works, at a first look we can see the violent gesture of crashing in thousand pieces the just outlined sculpture, a liberating act, as he could free all his energy and exorcize himself delving in the material’s interior, removing the substance of the rock, emptying completely, a catharsis.
Then the Artist gets the man’s place; fragments, deprived of the cohesive force of the matter, are set free from their intrinsic form by Takahashi. In this total freedom he rebuilds them.
Once deprived of its voice in narrating itself, the material lets to be taken, subdued to the artist’s wish, without creating conditions, leaves to be moulded.
In this second phase, the Japanese Artist, patiently reconstructs the volume and the shape.
From destruction, the rebirth, as happens in life, in man’s story, in human kind history.
Pieces, unaware of the future shape, let them to be composed in a final project; they are mostly reassembled with a bright colourful mastic, in opposition to the marble’s whiteness, and then sewn again with coloured nylon: charitable sutures to compensate the pain caused.
A fundamental darning in these works: the construction from destruction, a scar tissue that the artist deliberately wants to be well visible, that remains in the story of these sculptures as an attestation of a past integrity.
The elements that form the rock are the same that will take part in the future shape, in a loving gesture Takahashi involves them in their progress.
We are in front of shapes that born from an antithesis: the sculpture rises from the broken marble.
An interior need of the Artist who tells metaphorically about the story of life through his works, pain and joy from a returned life.
But Kenji’s research does not stop here, he appropriates of the Zen philosophy, in which perfection and imperfection coexist and perfection is hidden between the turns of what we think to be imperfect.
And so in his sculptures, Takahashi allows us to see inside of them, because the matter in itself, in its primary shape represents perfection.
In other sculptures Takahashi plays in a challenge with the marble, realizing shapes from a unique block, creating unimaginable curves.
In these we find minute pieces of marble, in a little groove along the sculpture’s dorsal, they are inserted with meticulous precision and care, then entrapped beneath a cobweb made of coloured nylons as to give life to the inert marble and giving to them the role of vital canals where the lymph can flow.
Works that Takahashi offers to us after an interior investigation of an existential condition and a materic-formal research proper of a great Artist and a deep acknowledged of the threatened element.
Unexpected shapes, works that tell their story, that surprise for their realization and that amaze us for their elegance, that fascinate for their hermetism.