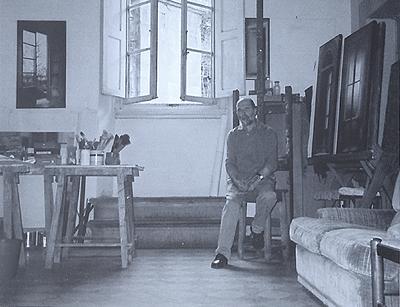 Lorenzo Giandotti exhibited at Galleria Gagliardi from 2006 to 2008.

.. Giandotti's painting is the painting of silence, a silence that leads to the contemplation of the things of life, where one can taste their essentiality, one enters into the material and knows its nature; he succeeds in reducing all this to colour, to fiction in order to imitate a truth and attempt to reach it. A technical skill that succeeds in capturing the chromatic vibrations of stone, plaster, wood and glass on which time has left its marks, and all this with often monochrome colours. There is in his paintings a relationship with experience, with reality understood prevalently on the interior plane of affections and emotions, a cultural memory where we find subjects that time has left us. A metaphysical painting, a narrative ambiguity where doors and windows almost always ajar or half-open allude to a human presence, never described, only evoked; one has the impression that someone has left the scene or is about to reach it, suggesting a subtle and disturbing sense of suspense. An ability to make visible the experience of open, closed, caressed, rejected, slammed, dirtied and scratched doors by the man with whom they shared their lives. Each of these doors, open or closed, tells of the anxieties, fears, tragedies, loves and disappointments of those who have passed through them. Always in solitude, where men are absent, but their passage is present. Doors and windows of old side streets, forgotten in the heart of the old city, doors and windows that can no longer be in tune with the frenetic life that flows around, with an anonymous urbanisation, becoming themselves an archaeology of feelings in a society that seems no longer able to pause, to laugh or cry. Text taken from: Come le bottiglie di Morandi Viaggio intorno alla pittura di Lorenzo Giandotti by Francesco Gurrieri Lorenzo Giandotti opere recenti 2004 Accademia delle Arti e del Disegno Firenze

Lorenzo Giandotti, a Florentine artist born in 1935, still lives where he was born, in Viale Petrarca, and still frequents the San Frediano neighbourhood, even though everything has changed. A friend of Professor Guerrini's son, in his adolescent years he assiduously frequented the professor's house, where he was taught to look, draw and paint. He also began to go out with the professor for a walk, a good time and so Giandotti remembers talking about many things, many problems, pleasant things and work programmes; thus a solid osmosis was created between master and disciple. Then came the years of work at Cantagalli (until 1958), the famous majolica factory on the Via Senese, and the assiduous visits to Arnaldo Miniati's studio at Villa Albertina, in Via Dante da Castiglione. From 1962, the year in which his most bohemian period ended, to 1972, Giandotti had one of the most important experiences of his life: he spent ten years in Ponziani's workshop, in the beautiful 15th-century space in Via Santo Spirito. It would be too much to describe all the richness of these years, as Giandotti recalls in the catalogue that accompanied the 1984 exhibition at the Michaud Gallery: the relationship with older painters, the requests of absurd clients or astute antique dealers, the sometimes repellent transformation of emotional energy into fiscal energy that takes into account production times, etc. But precisely in that space and in that conditioning situation, the relationship with things slowly becomes a tactile experience like that of children with the world of reality around them: the only way to appropriate things. Today Giandotti has his studio in the Casa d'Annalena, opposite the entrance to the Boboli Gardens, and it is from there that his works come out: the oils and etchings that reclaim a culture that no longer exists.