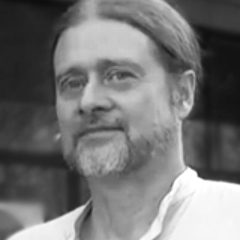 It seems that Galligani possesses, among its many quality plastics, whether the dowry of his special vision of synthesis and fusion of condensed mixtures between spontaneity and craft, between romanticism and classicism, with quieter ways of naturalness. He is, in short, capable in his work to lift an imaginary romantic and classic at the same time classically romantic, without anything to force the process of the expression: it is the inspiration that finds, in the material, hers expressive reason and in their fantasy, the lyrical emphasis. The sensual sirens, thoughtful worship, the gods and the sibyls, the sphinxes and jellyfish fleshy and seductive are concrete expressions of Myth.

Sculptor Luigi Galligani was born in Pistoia in 1957.
He attended the Academy of Fine Arts in Florence and Carrara where he graduated in 1980 with a thesis on Marino Marini.
In 1993 he received the title of Accademico Corrispondente della Classe di Scultura from the Accademia delle Arti del Disegno of Florence;
Luigi Galligani has exhibited his works in galleries in Italy and abroad and his works are in private collections in Italy, the United States, Holland, Belgium, Great Britain, France, Spain, China, Japan, South Korea, Austria, Switzerland, Germany, Greece, Lebanon, Luxembourg, Sweden and Australia.

Luigi Galligani stands out in the contemporary art scene in the field of sculpture thanks to his unique works in bronze, terracotta and iron, which depict characters from the dimension of myth, particularly Greek. Among Galligani's favourite subjects are mermaids, fascinating and mysterious creatures of the sea. The mermaid sculptures, especially those in bronze, are among the artist's most famous works.

Commissions and works in public spaces

1999 - The Region of Tuscany commissioned the artist Luigi Galligani the "Pegaso Straordinario 1999" for Eugenio Garin, historian of philosophy;
2003 - The American Company Royal Carribean International commissioned Luigi Galligani a monumental bronze: "Portatrice d'Acqua" and two terracotta busts: "Calipso" and "Circe" for the cruise ship "Mariner of the Seas";
2006 - the Association of Industrialists of Florence commissioned him to create a bronze work of art which he presented to Luca Cordero di Montezemolo on the occasion of the Assembly of 22 June at the Palazzo dei Congressi in Florence;
2007 - Galligani created the "Audience prize", a bronze bas-relief, for Ilian Simeonov, director of the film "Warden of the Dead" in the section: "Beyond the Mediterranean" at the 2007 Taormina Film Festival;
In the same year the Municipality of Orbetello commissioned Luigi Galligani the bronze group of: "Le Tre Grazie" (The Three Graces) which is permanently placed in front of the Town Hall in Orbetello, in Piazza Plebiscito;
2008/2009 - Galligani created two large gilded bronze sculptures: "The Song of the Sirens", for the Encore Hotel Wynn Las Vegas, in Las Vegas and for the Encore Hotel Wynn Macau, in Macau (Steve Wynn Collection);
2010 - Carlo Franza presented a solo exhibition of Galligani's work at the Circolo della Stampa in Milan (Palazzo Serbelloni), with the collaboration of the Galleria di Ada Zunino and in that same year he received the Sculpture Prize;
2014 - Salvo Nugnes, Director of the Milano Art Gallery, organizes a solo exhibition of sculpture by Galligani, with the presence at the inauguration of Vittorio Sgarbi who will then write about him in the monographic catalogue of the exhibition;
2015 - Galligani, in collaboration with the Gallery Bell'Arte in Maastricht, creates a bronze version of the "Song of the Sirens" for the recently restored Hotel Kurhaus in Scheveningen. 2016/2017 - Galligani, again in collaboration with Gallery Bell'Arte, creates a bronze work: "Venus with a Mirror" again for the Hotel Kurhaus in Scheveningen.