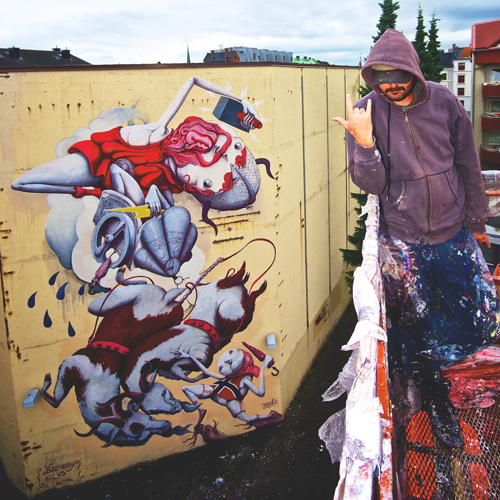 Zed 1 exhibits at Galleria Gagliardi since 2019.

ZED1 was born in Florence on 25/04/1977 and studied graphic design at the Lucrezia Tornabuoni school in Florence.

ZED1 has been a street artist, in the truest sense of the term, for over 20 years. Through a constant and varied development of the technique, his style evolves accordingly to his work as writer, which leads him to paint trains, walls and surfaces of all kinds. Following his predilection for imagery, he succeeds in creating a world of humanoid puppets, which, in their illusory sterility, interact with the world around them, evolving both in space and time (as in the recent "Second Skin"). Zed1 moves, through a fine dance of shapes and colours, in a post-modern surrealism that, even in its most irrational features, refers to a clear awareness, sometimes melancholy, sometimes extraordinarily ironic.