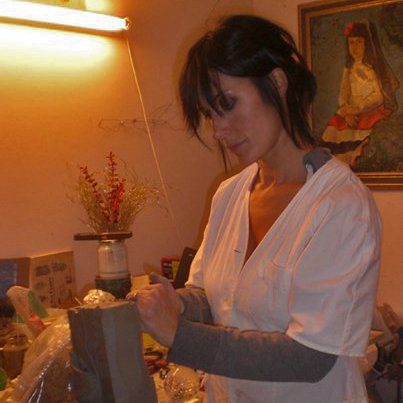 Maria Cristina Costanzo exhibited at Galleria Gagliardi from 2013 to 2016.

I called my sculptures "Souls", to recall the concept of an eternal, spiritual, impalpable "substance". In this way I "materialize" what is generally identified with the life principle and the immortal part of people. In my figures, mainly made of clay,I enclose the inner movements belonging to me and to life itself, either conceived as a fantastic metamorphosis from a caterpillar into a butterfly or as a precarious balancing act. The word "soul" comes from the Greek "anemòs" which means "breath", "wind" and from the Phoenician "ani" (I) and "ma" (energy or also thinking matter). Therefore, soul is energy and the thinking part of a human being that is indivisible from it. The term "soul" stands for an ethereal, metaphysical concept deeply tied to the person: it is the true essence of the human being. In my works I expressed my need to give form to this abstract concept, not only through the choice of the material (God made the first man from clay), but, especially, through the LOOK of the faces I portray. Indeed, we are what our eyes reveal, aren't we? Through people's glance I can suppose their deepest essence: I can know the others and let me know by them. Who looks into our eyes desires to have a dialogue with us, to meet us and our spirits. My figures want to touch viewers' emotions and unlock mechanisms apparently rusted. They tell my past and viewer's past too, so that anyone could find in that glance part of himself... Maria Cristina Costanzo