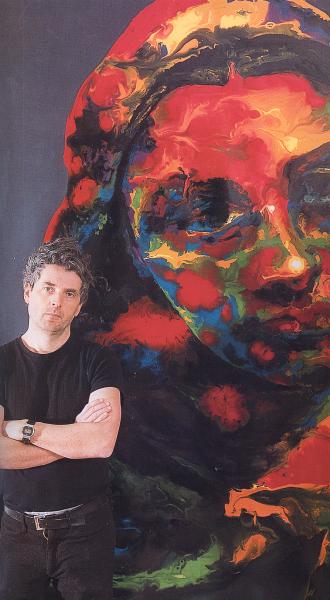 Massimo Pulini exhibits in our gallery since 2008.

"The bright enamels on x-rays, set apart from the world of appearances, are creatures which belong to a timeless space of past emotions surviving as memories. The Artist prevails over the art historian in a hypothetical feeling that avoids the obligatory paths present and past. D.M. "From his visitation of the Koelliker paintings, paintings which come from different genres (religious, mythological), Pulini extracts, circumscribes, emphasises a face and thereby creates a "portrait". So the "meshing of parallel lives" which Pulini has always done in his art today also includes the great Italian collector, caught up in that vertiginous dimension of mirrors and amplifications which the artists structures, starting from his own cultural adherence, both affective and ethical. A poetic appears in these new works by Pulini which makes an archetype dimension prevail on individuality, like it was in the past. These "portraits" do not seize souls, feelings, psychologies or social statutes. Instead, they are placed on slippery, liquid plains where the routes of form cross over their own undoing. "The secret of form lies in the fact that it is the confine. It is the thing itself and, at the same time, the end of the thing. The circumscribed territory in which the Being and Not- Being-anymore of the thing are one", Geoge Simmel wrote. ...These surfaces which bring to mind sound waves and thermal waves" E.F.