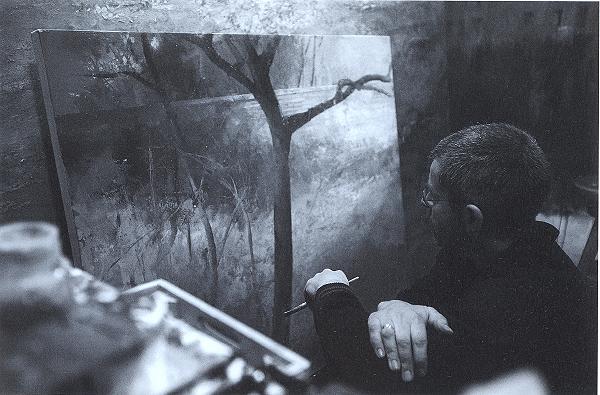 Matteo Massagrande exhibited at Galleria Gagliardi from 2008 to 2011.

"His paintings have especialy intimacy, where light and colour play predominant, almost exclusive roles. P.R. " Massagrande's vision is completely interiorized sensitivity, the stimulation of a prehensile memory moved to accentuate the light that radiates from things and that constitutes the texture of matter, of nature, of flesh,of the setting, like a syncopated and expanded resonation of energy, passion and engagement. A substantial "nostalgia" of forms, places, colours, odours, atmospheres, cuts of light, impressions, and emotions permeates an executive tension maintained by great skill and mastery, and carries forward a desire and a need to create something, not by way of representation, the pure and simple recomposition of thr image of reality, but as something felt anew, an inner resonance that stimulates and sharpens our sensory memory. It is a sort of singular imprinting that reestablishes the relationship withthe real, against the instability of overhasty vision that slips over things, and against the indeterminacy and inadequacy of prepackaged mass-culture images in the press and on television. Every object assumesy particular meaning in the fluid context of his personal experience of life, comprising tactile memories, technical suggestions, olfactory references, aesthetic tastes, and the accumulation of memories of presences, gestures, words and sounds. But this does not mean that Massagrande aims for the restitution of the object in and of itself, as an archaeological relic of his own history, and thus seeks to make it theexclusive subject of the tale and of a practice of painting that is simply the yardstick and reaffirmation of rediscovered time against the nostalgia for lost time. G.S.

The reigning atmosphere in Massagrande’s paintings owns a charming strength: seducing us, it nullifies the real world and encourages us to go through empty corridors with scraped walls, to open old doors to discover abandoned rooms made dusty, silent and desolated by time and sloppiness.
Muffled and quiet surroundings, in which light filters by half-closed curtains, where tables with rests of frugal meals have been just left by the fellow diners.
In these places time is suspended.
But we are expected to see new tenants coming in; they will bring new life to the house, the bare trees on which windows overlook, will soon fill with tender and green leaves, table will be set again with bread, eggs, fruits, rooms will be refilled with the guests’ buzzing.
This is the magic of Massagrande’s art works.
Corridors, rooms, tables, solitary beaches, are memory’s places. They are situations, settings that are part of an experience belonging to each one of us.
These works have the strength and the power to refer to memories of places, atmospheres, lights of a particular day hour; remembrances recalling frames of other lived instants.
The paintings of Massagrande are not look at, they have to be lived, listened, smelt.