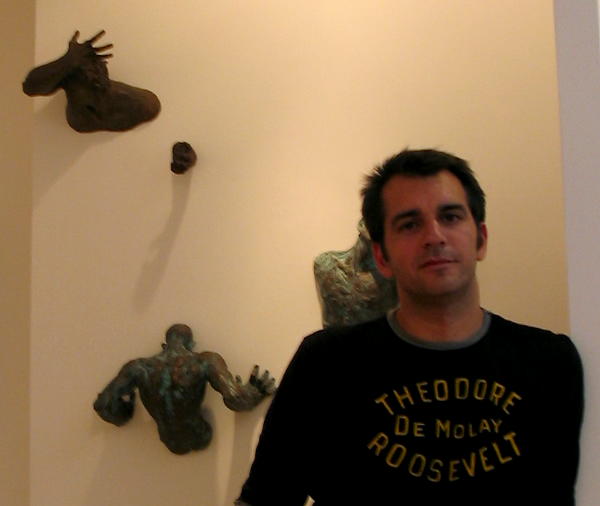 Still before knowing Matteo Pugliese in meat and bones,I have known him in one of his clay forms, while he was pushing out of an algid white wall, lacerating himself the muscles, shouting a painful silence with wide open eyes up to break themselves. I have observed him for a long time, from every angling, under every light, as hypnotized in front of that materialized cry - principle of escape, utopia of salvation - that only a well trained conscience to the blindness would have been able to ignore not to recognize as its same reflex.I would like that you succeeded in devoting a hour of your time to this offer of a new experience, that you stripped you of every role, mask, self-defence, that you dipped you in this microcosm of white walls from which now sprout a face, now a face and an arm, and then a leg, and then a whole body, that twists him to free himself from some flat innocence, to be born to the senses. There is no peace, satisfaction there is no calm; the goal is the movement, the destination, the escape.Every new reached condition, ends up anesthetizing the senses and these "damned of the perpetual motion" they have as misssion the endless search of the Truth, aware that the Truth with it "V" capital it doesn't exist, we can convince only us that it is that "comfortable armchair" on which to let us survive when we become too much tired to continue in the search, too disenchanted for keeping on cultivating a hope, too much old men to go Over.  Antonella Baldoni

Matteo Pugliese was born in Milan in 1969.
In 1978 his family moved to Sardinia where Matteo lived for the next 12 years.
During this time he developed a strong love for drawing and sculpture and continued his art work without any formal education. After finishing his secondary school studies in classics in Cagliari, he returned toMilan to attend university.

In 1995 he was awarded his degree in Modern literature at the University of Milan with a graduation thesis on Art criticism.
Encouraged by friends, in 2001 he organised and financed his first solo exhibition renting private exhibition space in the centre of Milan. Only 18 months later he held his first “official” exhibition in a gallery in Brera, Milan, and after a few months he held a solo show in Brussels.

Today his works are on permanent display in galleries in Italy and major cities throughout the world: New York, Rome, Hong Kong, London, Antwerp, Lugano and have been shown at some of the most important Italian and international art fairs such as the Hong Kong Art Fair (Hong Kong), ArtFirst (Bologna), Arco (Madrid), and Fiac (Paris).
In recent years his pieces have been sold with considerable success at some of the world’s most prestigious fine art auction houses (Christie’s, Sotheby’s, Bonham’s, and Dorotheum).