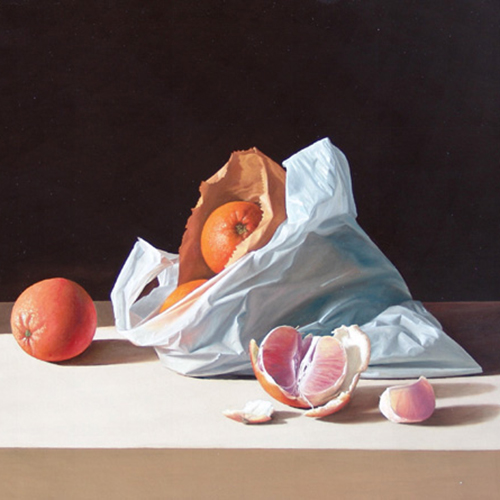 Michele Taricco exhibits in our gallery since 1994.

The game is observing Michele Taricco’s paintings with a lens following their small strokes, letting them move you into a microcosm where every single stroke of colour plays its own rule and has its own logic. It is a balance of colours, some precise ones, into a strict dialogue between matter and light.

Observe with particular attention how deep white is, its chromatic variations being the slightest.

Precise and wise is the track left by the tiny point of the brush that underlines its subjects, kindles the glints on transparent plastic bags, on curled leaves, on the edge of a glass.

We so enter into Taricco’s motionless and silent world. A limited space such as a canvas is a world where the artist himself enters, closes the door of reality and he is by himself.

In order to paint, the artist need to enter his interior world and search on his own memories, his interior images transferring a breath of poetic life into his work rendering it a unique one.

The space on the canvas becomes the place where the real image finally accepts the poetic reality of a more interior and secret vision. Taricco’s works are mostly considered hyperrealistic; they are the result of the attention that the artist always pays to the common object as an integrant part of our reality: compositions made of poor objects of daily use which we do rarely pay attention to in our frantic life although here they are, brought to the fore, regarded, they recovered their dignity giving them their own space and life. Taricco does not yield to deception of real life where things seem to have no soul and to be of mere matter only of our daily use. In real life we touch, use, manipulate objects and they cease to live because they have been broken, left alone, forgotten; they share our life into the grid of passing hierarchies and very often as something outside; the eyes see the forms but the soul very often neglects the fascination.

While we live our becoming we pay very little attention to what it was. Taricco does not yield to deception of a real life but he knees the magic of true real life made of details; he catches a dimension for us where the objects tell their existence in contamination with men; he renews dialogues which were interrupted where unforeseen suggestions and the truth surface again. Taricco reassembles the evidence and entirety of reality where one can perceive the objects the way they really are or have been, true and personal objects full with life and dignity. The space where they live is the hyperreal space of poetry and magic. By his elegant precision, Taricco paints fruit still into the transparent plastic bags we generally find at supermarkets; how many times did we pay attention to that single plastic bag full with oranges, lemons, grapes that we hastily left on the table when back home? We can find it on Taricco’s canvas, celebrated, under cuts of light letting the bag live again otherwise motionless. Provocative, almost a claim against desertion and negligence, in Taricco’s canvas we find old buildings to an industrial archaeology, dumb buildings in an immobility that desertion transformed into ancient ghosts, orphan of the kind of work rendering them alive. He perfectly paints black sacks abandoned in the street full with urban waste, he celebrates a pool of water where an empty tin is floating, a worn rag wind transported and left that got caught in the iron of an old net. He proposes us torn posters which every day accompany us along the way we go through, posters giving the sense of time with their stratification of torn paper that someone enjoyed to flay leaving an evidence of a passing or a presence. Again, daily-life objects, an old chair, empty fruit wood crates at the corner of the fruit shop, a weather-worn door that has been closed for years, worn windows overlooking crumbled walls, a bicycle against a wall waiting for its owner’s return. Objects, just objects which Taricco’s brush restores by his wise use of light. If we have a better look anyway, by surprise we realize that every single detail of the master has a talk with us too. In our everyday we are definitively submitted to a continuous succession of images which, the same as a kaleidoscope, invade our mind and weaken sensitivity: the memory of our gestures and glances do not often go beyond gestures themselves and the hastily “unseen” things.

Maintaining high and intact our degree of attention for the world is more and more difficult. Sometimes, we get disconcerted and live reality in an unreal manner: we get lost in watching always more and the result is that we always get somewhere else. For Taricco such a risk does not exist: he is an artist who creates works where beauty is the result of an intense and intimate relationship with the surrounding reality, it being outside the canvas and feeding on love and care in wisely choosing the subjects of which he measures carefully lights while his glance investigates beyond the real.

Taricco represents us with a key that, by inviting us to see through the eyes of the spirit, urges us to dwell on and share a poetry transmitting to such modest items its own soul giving them that longing of life spirit involving us

Michele Taricco is regarded as one of the most prominent Italian contemporary artists, and an outstanding figure of the European Surrealism school. Taricco was born in Trieste in 1927. His initial art career was affected with the realistic approach, but consequently made a turn towards surrealism. In 1972, he made various personal exhibitions at the largest European and American galleries. In these connections, it is worthy mentioning that Taricco's paintings are exhibited, among other artistic selections in New York, Paris and lost of the other Italian and European cities. In association with the Cultural Foundation in Abu Dhabi, Embassy of Italy in the U.A.E. shall organize the exhibition of the Italian artists Franco Azzinari and Michele Taricco. As a matter of fact, the above Italian artists symbolize, to a great deal, the northern and southern parts of Italy in terms of Art creativity and production where Taricco descends from Trieste and Azzinari from Calabria. Looking at the artists pieces of art and paintings, you should be definitely impressed by their creativity where both artists seem to have devoted all potential to serve the pare artistic production. For instance, Taricco's paintings are characterized by the features of extreme close to reality where objects become palpitated with life, to the extent that views get curious to touch such objects to ensure how real and living these paintings could be. This talented aspect of Taricco could be obviously seen in his paintings of fruits and even plastic bags. It is a pleasant occasion to present to a personal show of Michele Taricco, to explore across wonderful and exact touches his paintings; In fact, such moments of great painting is extremely rare in the view of the present art. Alberto Alboneti