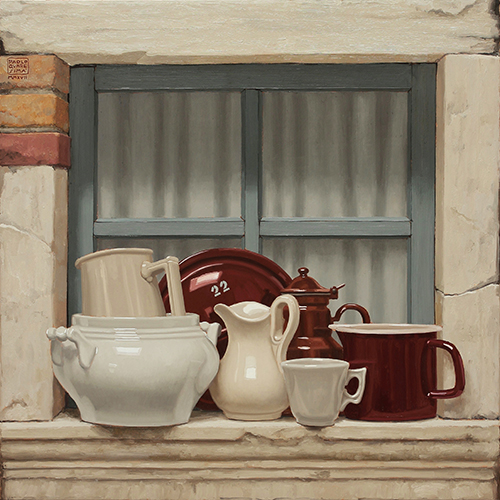 Paolo Quaresima exhibits in our gallery since 2013.

Paolo Quaresima after graduating from high school, he graduated in 1988 at the Academy of Fine Arts in Venice and since then he has devoted himself entirely to painting. At the heart of pictorial research of Quaresima there is the Man: women and men portrayed in environments absolutely essential for to focus the figure,the character, the strength. Then, from a few year, Quaresima paint also objects. Object, Objects, rather than still lifes, because with these paintings, our gaze widens to the usual tools of life, at the tools of every days. Again and always the Man, told by his things, as if he is there, just a step to the side, out of the picture. The Certaint of Objects

Incomparable cantor of the little details of everyday life, Paolo Quaresima seizes daily objects and materials with the ability of a magiccian. Shiny metal, chipped porcelain, scraped paintingupon a wooden shutter, plaster, glimmering glares upon a stretch of water, folds of a tablecloth, rough grain of a wallpaper leap out the canvas more realthan reality itself, awakening unknown perceptions. Its subjects resemble icons carved by a cutting and implacable ligth. Apart from any sterile debate upon painting and photography, the artist goes beyond reality providing something which will never be reached by photography. Not even at high definition. Through his works, hyperrealism develops into metaphysical atmospheres becoming deeper, and more stratified, something which could be defined as Ultrarealism: a different and perfect world scanned by harmonious chromatic scores. Banned from the framing, man becomes present absence and indisputed protagonist described through the trace of his daily gestures. A scratch upon the edge of a pitcher confirms it has been used, as the barbed fold of the tablecloth declares the strain of who has iroded it. The artist defines these as “memories of ordinary and unique lives; mute witnesses of emotions, feelings, anxieties and hopes”. So his works can be interpreted as a gallery of precious recollections or, as he says, “scenic designs of a performed show”.
There are many collective and personal exhibitions in his long career in Italy and abroad, his works are in important collections all over the world.