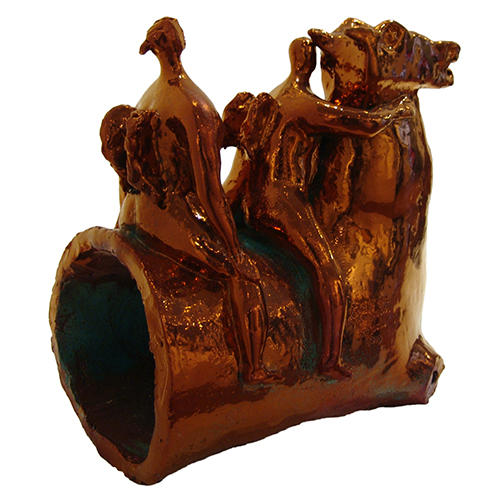 Paolo Staccioli exhibits in our gallery since 1993.

I believe that Staccioli's great ambition is underlined by his plastic art: that of a return to the Etruscan origins, re-appropriating, understanding, and confirming them. A certain - intentional- mystery surrounds these figures, constructed with a deliberate roughness, not too open in their hedonistic aspects, as happens with the vases, touched up by lumps of clay which are manipulated and pressed towards internal, hidden meanings and inaccessible secrets. The same thing happens with theheadlong falls of his horses, and their precarious positions on top of unstable columns, and together with them, the slight, sketched, unbalanced little figures of human beings. Let me repeat that Staccioli's ambition is extremely significant: that of pursuing an ancient world, the dream of antiquity, and of fragments of a civilisation which he intends to reconstruct by means of the indications of pictorial and plastic dremas. We must undoubtedly recognise that he possesses the right temperament to do so, if we also bear in mind all that happened in the last fifty years of "anachronism" in the world of the arts, which Staccioli approaches with a primitivistic spirit. Gian Carlo Bojani

Born in 1943, Paolo Staccioli began his career as an artist in the 1970s, starting out as a painter and soon attracting attention at the local level. In the early 1990s, the need to experiment with a new artistic vocabulary prompted him to move to Faenza, to the workshop of a local ceramist and potter called Umberto Santandrea, where he learnt the techniques and skills associated with this particular art. It was here that Staccioli produced his first vases, initially adopting the glazed ceramic technique then gradually experimenting with “reduction” firing, which allowed him to achieve an extraordinary iridescence and sheen.

Having fully mastered the technique, Staccioli then set up his own studiocum-workshop in Scandicci on the outskirts of Florence, where he continued under his own steam to experiment on a daily basis with the use of fire and of copper oxides, producing a vast range of vases which he then decorated with imaginary figurative narratives fixed for eternity by an enamel sheen. These works earned him his first true recognition and success at personal and collective exhibitions as well as at important cultural events: his ceramics with their strong metallic effect and sparkling enamel finish soon won praise for their elegance and originality not only in Florentine art circles but throughout the country.

The characters that populated the surfaces of his ceramics in this phase (merry-go-rounds with toy horses suspended in mid-air accompanied by winged putti, trumpet players, dolls and Pulcinellas) soon acquired a third dimension, translating into sculptures yet without losing their fairy-tale aura, their extraneity to all notion of time or place: idealized shapes reminiscent of pre-Roman statuary (of Etruscan sculpture in particular), to which the polychrome of ceramic added a vigorous effect of contrasting masses. Warriors, travellers, cardinals and horses soon joined the already varied throng of imaginary figures and began, in the second half of the 1990s, to add their lively touch to major public and private collections both in Italy and abroad.

In the early part of the new millennium, in his eagerness to experiment with new materials and with different expressive registers thanks to the use of those materials, Staccioli began to translate his ideas into the more lasting medium of bronze (albeit without ever losing his love of working with earthenware), moving away from research into copper oxides and towards metallic patinas. It was in this more recent phase that his figures took on a previously unknown monumentality, which tends to set his horses and his warriors even more firmly in a dimension outside of time.

Paolo Staccioli has won an enormous amount of praise and recognition both from critics and from the general public, especially over the past ten years, and he has taken part in awards and exhibitions that have won him a place of absolute prestige in the field of contemporary art. His most recent exhibitions include “ANIMA MUNDI” 21/02/2004 - 14/03/2004 Galleria Gagliardi San Gimignano

One of his works was chosen as the Tuscan Regional Authority’s official gift to President of the Republic Carlo Azeglio Ciampi in April 2006, and at the end of the year, in November, another of his works was added to the permanent collection of the Museo Internazionale delle Ceramiche in Faenza. He travelled to China in the spring of 2008 in response to an invitation from the director of the International Ceramic Art Museum in Fùpíng, commencing fruitful cooperation with that institution and producing several works while he was there, all of which are now part of the museum’s permanent collection. Other ceramic creations of his have been selected as prizes for lifetime achievement awards to two distinguished protagonists of the “Estate Fiesolana” festival: American film director Spike Lee and actor Dario Fo. A personal exhibition of his work was inaugurated at the Italian Cultural Institute of New York on 4 June 2008, and to tie in with the event, two bronze warriors were chosen by American collector and magnate Jack Larsen for his Longhouse Reserve sculpture park in East Hampton. A work of Staccioli’s was also offered to President of the Republic Giorgio Napolitano to mark the twentieth anniversary of the Scuola Superiore di Sant’Anna in Pisa in October 2008. His more recent experiences include participation in an exhibition entitled Memorie dell’Antico nell’arte del Novecento [Echoes of the Classical World in 20th Century Art] at the Museo degli Argenti in Palazzo Pitti in Florence in 2009, and his personal exhibitions at the Italian Embassy in Washington (April 2009), at the Selective Art Gallery in Paris (September 2009), at Spazio 522 in New York and at Kens’ Art Gallery in Florence (both in the spring of 2010). Finally, in September 2010, he held a personal exhibition of his work in Pomarance, where a bronze warrior is shortly to be erected outside the town hall.

In 2012 he exposed some of his bronzes at Pietrasanta, Piazza del Duomo and at the Galleria Paoli, and exhibited in Siena “Il guerriero e la farfalla. Paolo e Paola Staccioli”, Ex convento Santa Chiara, Nobile Contrada del Nicchio; in November at the Fortezza da Basso di Firenze on the occasion of the Salone del Restauro di Firenze; in December he was Guest of Honour both at the Contemporanea Arte Moderna e Contemporanea Fiera di Forlì and at Imagina. Arte in Fiera of Reggio Emilia.

In May 2013 one of his Bronze Warriors was erected in a square of  Pontassieve (Florence).

On september 2013 a personal exhibition will be held on the occasion of the Festa della Ceramica di Nove (Vicenza).