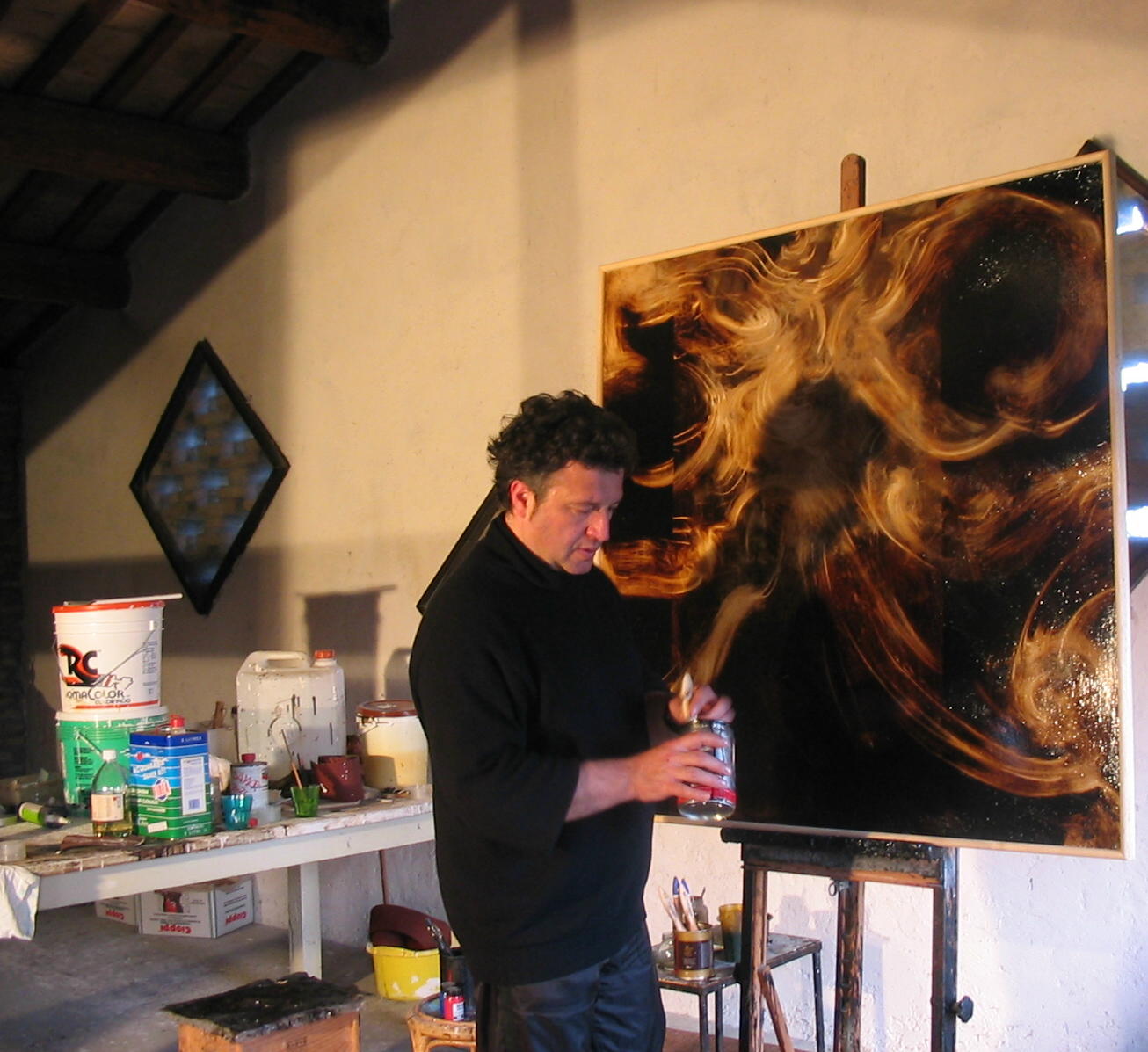 Pier Giovanni Bubani exhibited at Galleria Gagliardi from 2004 to 2006.

A picked bundle of light in the night, where the night is darker than every other reality, as if the dark cloth produced of sudden the light one but defined vastness of a bright tear of existence. The black is the color of a desperate beginning, and the internal world of Bubani appears us, before sfrangiarsi of light, as waiting for a decisive epifany, of a dawn after the endless length of the night. Bubani is a painter in attended, his/her figurations - images of light in movement - they are catartic motions that has crossed states of alienation. But in the works on paper we discover a visibility of nature, as if after so much to wander in dark cosmoses (unknown cosmoses of the soul) we regained a perception of the things; and approaching we are glimpse incisions as to fire - that instead they are done with spatulas and pointed utensils -, small out lava castings to black drop to be reflected themselves on the cardboard worked with the vinavil in transparency. The final result is a sequence of natural sedimentations as picked up after the abandonment of an ancient sea. I would say that it is important when he powerfully discusses of objectual painters as Bubani to report their expressive quality of assemblage where an inside music distinguishes and dignifies the grevit's of the materials.

Born in Bagnacavallo in 1960, Bubani devoted himself to painting at a very young age. He has been working intensively since the early 1980s, initially also as a sculptor. In 1984 he held his first important personal exhibitions in Lugo, Ravenna and Milan; he subsequently took part in important national and European art exhibitions. During the 1990s he collaborated on artistic events with poets Alberto Cappi and Paolo Valesio. He currently lives and works in the countryside of Bagnacavallo.
His artistic itinerary, as a self-taught painter, is marked by radical breaks and innovations and, at the same time, by faithfulness to personal linguistic and stylistic solutions.
Since the early 1980s, his activity as a painter has had a strong personality, with his first personal exhibitions at the Patio (1984-86) and at the Loggetta Lombardesca (1989) in Ravenna. He confirmed his reputation in the 1990s with personal exhibitions in London at the Lighting Research Center (1997), in Faenza at the Circolo degli Artisti (1998), and in Cesena at the Pinacoteca Comunale and the Vicolo (1999).
He has been invited to important group exhibitions in London, Belgium, Holland, Paris, Ferrara, Milan, Turin, Rome and Mantua.
His work has been examined by Pierre Restany, Claudio Spadoni, Maurizio Corgnati, Martina Corgnati, Franco Solmi, L.Smith, G.R. Manzoni,and Franco Farina, among others.