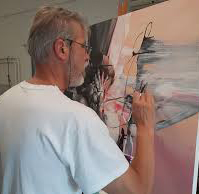 Pier Toffoletti exhibits in our gallery since 2018.

All the works published on our website, are present in the gallery, are original and sold with our certificate of authenticity, with photos and data of the work itself.

The Body Splash and Face Splash works are made on canvas with acrylics and oil, are unique, original and handmade without any analog or digital support.

ARTWORKS "REMAKE" by Pier Toffoletti by Pier Toffoletti are made with photos printed on canvas and shot with brushstrokes of oil and acrylic that make it different from the original, the works "REMAKE" are present in other galleries but not in Galleria Gagliardi.

As in musical remakes, where successful songs are re-proposed with new rhythms and sounds, in the field of visual art as well, Pier Toffoletti proposes a selection of some of his original works, with a technique he himself developed, of contamination between painting and technology that allows him to obtain a reinterpretation similar to the original work but not the same, with new colors and pictorial solutions. Therefore, this is indicated and signed on the back as a "Remake", it is a unique piece of work but not original.

For company policy, Pier Toffoletti's Remakes are not distributed in galleries but are presented by a single referent in international Affordable Art Fairs, at an accessible price for these fairs

His hands search for the colour by compressing it, completing a work that actually takes shape by deflagrating  the shape itself, appearing as a positive negation, as a rebirth from the ashes of what is left of pure existence, as a dimensional passage that goes beyond the theater of our lives. Nothing to do with dripping or with Pollock’s action painting. Indeed, in this case the apparent randomness is governed by the profession and the broad academic knowledge with the mental parameters that Toffoletti imposes on himself the choice of the size of the canvas, the selection of colours and a basic composition that is often morphologically recognizable. The most mysterious and relatively new part, instead, is the epilogue, that we could define as the epiphany of form. The lucidly excited, desperately animated quest becomes more cerebral and meditated with the discovery of a female body – or better, with the rediscovery of the spirit of an organism. The performing action becomes deeper, slower and almost meditative in conferring consistency to something impalpable. In that moment, Toffoletti complies with the call of the spirit that asks to be dressed, to have a material semblance. Many are the spirits that the painter from Friuli must research and cover with colour, exalting an almost otherworldly light.

He has had many personal exhibitions in public spaces and museums in Italy in almost all the territory and abroad as: