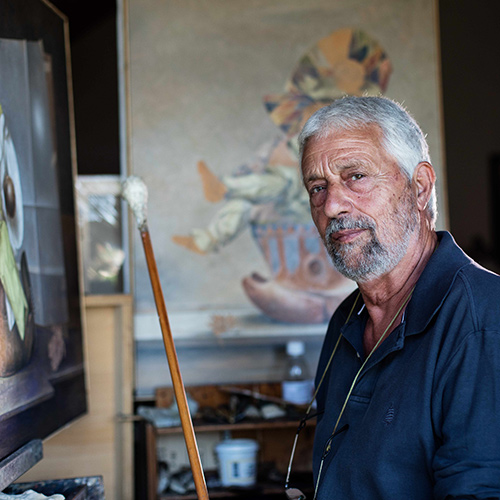 Renzo Galardini is a classicist, a renaissance, his technique, his subjects evoke the ancient world, expressing the strength of the painting and the teaching of the Ancients. We might add that he is a romantic, a sentimentalist, master of that decadent sense promoted by a purely Northern European taste, a taste that refers to the exotic, to travel, to dream, to match ultra-sensitive, to the great Hieronymus Bosch, a painter of the fifteenth century which great artists were fascinated as Max Ernst, Giorgio de Chirico, Salvador Dali and Marc Chagall. Renzo Galardini is also a contemporary artist, lives and relives in his compositions the tensions of mass society: small headless figures in a boundless space that act and operate intent to make unusual and sometimes impossible actions. These figures are lost in the equilibrium of the composition as the man in the unnatural everyday space of the consumer society, but there is no ugliness, only manic and delicate brush strokes that make the painting work and give a message. Coexist, therefore, heterogeneous components that emphasize creativity and sensibility of the painter, qualifying him as a true artist, the undisputed technical ability and imagination come together in the supremacy of deception surreal. Reminiscences and allegories made of childish games, horses, turtles, puppets and garlands with which the artist expresses their social and moral values, making his painting cultured and full of meanings. The essence of the real fairy tale is narrated in the settings, spaces in which the artist is a puppeteer with thin wire that holds its own still life painting made of textiles and paper, of great refinement and elegance.

He got his high school diploma at the Lucca Art Institute under Guglielmo Malato and Vitaliano De Angelis and then attended the stage designing course at the Fine Arts Academy of Florence. He is a painter, engraver and ceramist. In 1984 he was reported in the Bolaffi catalogue for graphic art by Enzo Carli with the following motivation: «For the provocative and ironic creativity of his clear graphic technique used to recall in an unprecedented poetic fashion historical simulacrums, emblems and symbols, as well as present-day objects».