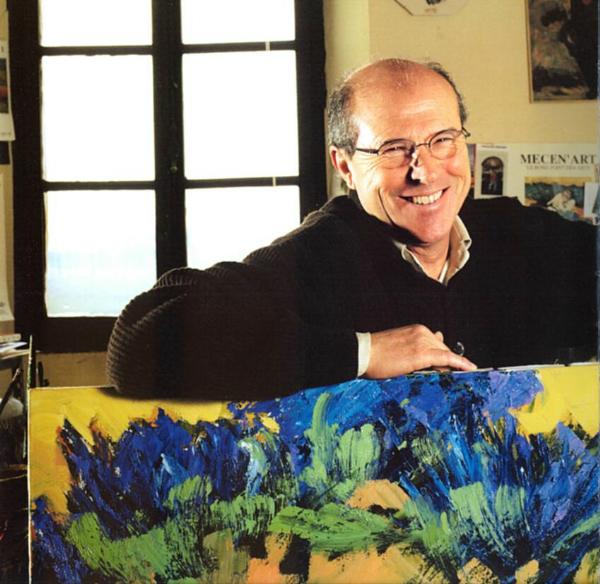 Sandro Negri's entire oeuvre expresses a perfect communion between man and nature; the harmonic and symbiotically union nearly suspendedbeyond time, originates from themes suchas the rasping and lavender's picking, strongly anchored to a centurial past and marked by regular gestures. Farmers are silhouettes moulded by labour's heaviness: they perform and only slightly modify the harsh and inexorable rhythm imposed by earth and yield to it through a daily struggle, carried on with sincere and admired respect. This artist gives his paintings a temporal dimension, thanks to an essential pictorial idea, which,although in a fresh figuration of a traditional kind, does not indulge over a descriptive detail with gratification, but returns an interiorised vision of endless plat lands. Negri's gesture is quick, spontaneous and aggressive; the thick oil, directly poured on the canvas and the use of the spatula at the start create mellow colours with a swift and unravelled stroke of the brush, with a modern European root. Fluid and musical intervention of the painter evolves into a joyful chromatic outburst. The burning wheat, golden mimosa and scented lavender.Some paintings, although with a firm colour tone, narrate in a low voice, nearly in silence: a fire-chain is hanging, the wood pell-mell is staked, old walls of farmers houses with old chairs in front the door, the broken branches of the "calicanthus" are whispering in a murmur of silent harmonies, simple events,which assume a loving and pregnant meaning and exhale a sense of familiar warmth. At last other works are more restless and permeated by a feeling of incipient caducity. Stefania Romani

Sandro Negri was born in 1940 in Virgilio (MN).
He painted in solitude and only in 1970 did he make his debut with a personal exhibition in Luzzara (RE), where he met Cesare Zavattini who encouraged him to continue his artistic activity.
His first monograph was published in 1976 with a preface by Dino Villani (ed. Adalberto Sartori). A versatile artist, in 1981 he was invited by the Municipality of Virgilio (MN) to take part in an exhibition celebrating the Bimillenario Virgiliano.
In 1989 he opened an atelier in Paris.
In 1991 he was commissioned to make advertising posters for the film "Vincent and Theo" by Robert Altmann about the two Van Gogh brothers. In 1993 he held an anthological exhibition at the Palazzo Ducale in Mantua, accompanied by a catalogue published by Electa, and the following year at the Rocca Normanna, in collaboration with the municipality of Paterno (CT).
In 1995 he opened a studio in Montanara di Curtatone (MN), in the 17th-century Palazzo Cavalvabò.
In 1997 two of Negri's drawings became part of the permanent collection "Vivian and Gordon Giikey" of the Portland Art Museum. In 2001, on the occasion of the opening of the Palazzo del Plenipotenziario in Mantua, he was invited for an anthological exhibition under the patronage of the Department of Culture of the Province of Mantua.
In 2002, in collaboration with the London "Gagliardi Gallery", he held an exhibition at the "Thè Lord Leighton House Museum" in London, which was a great success with critics and the public. He took part in the travelling exhibition in Spain Pàginas desde Lombardia un Museo de Arte Contemporaneo.
In 2004 he inaugurated another branch in Portland (USA); the same year Silvana Editoriale framed his work with an important publication by Raffaele De Grada and Claudio Rizzi. He was invited to the Poetiche del '900 exhibition in Castel Ivano (TN).
In 2005, the event Pàginas desde Lombardia - Itineranti di ritorno was repeated in Italy at the Civico Museo di Maccagno.
In the same venue he took part in the Metafore di Paesaggio exhibition, then at the Museo d'Arte Moderna in Gazoldo degli Ippoliti (MN), and the Spazio Guicciardini in Milan. In the same year, on the occasion of a personal exhibition in Milan, Rossana Bossaglia wrote the presentation in the catalogue.
In 2006 he ordered the extensive anthological exhibition Evocate immagini at the Civico Museo Parisi Valle in Maccagno (VA) curated by Claudio Rizzi, with a catalogue published by Nicolini Editore. Again in Maccagno, he took part in the exhibitions Acquisizioni 2006 and Arte Contemporanea in Lombardia - Generazione anni '40.
In 2008 the Swatch Group, in collaboration with the Azzali 1881 jewellers in Mantua, chose Negri to celebrate its 25th anniversary and allowed the artist to personalise a series of 299 watches, unique pieces presented in his atelier in a one-day event dedicated to Swatch Club collectors.
In 2010, an exhibition at Brian Marki Fine Art in Portland, USA, and a monographic catalogue with interviews with the artist and testimonials from US collectors celebrated his first fifty years of painting.
In 2011 he was invited to Moscow as the star of an event dedicated to him at the Mercedes headquarters and to hold a solo exhibition at the Bogolubov Art gallery.
At the beginning of 2012, with his exhibition "Homage to Virgil's Literature", the result of a workshop held by Negri with six hundred pupils from the Virgil Comprehensive Institute, which had already been previewed during Festivaletteratura 2011, the restored Virgilian Museum in Pietole (MN), the birthplace of the Latin poet and the artist, was reopened to the public. In the same year, the Study Centre of the Postumia Association hosted an exhibition of his works from the 1970s and 1980s entitled "Le origini e le radici" at its Gazoldo degli Ippoliti headquarters.
Sandro Negri died in Mantua on 10 August 2012.
In 2014, from 9 March to 13 April, a work by Sandro Negri was presented at the exhibition "Donna fonte ispiratrice d'arte", held at the Casa Museo Sartori in Castel d'Ario (MN); he is remembered with the personal exhibition "I Patriarchi", curated by his children Fabio and Carolina, at the Arianna Sartori Gallery in Mantua, from 22 March to 3 April, and, from 9 November to 14 December, he appears at the exhibition "Cento anni di arte mantovana dal secolo breve ai nostri giorni" at the Casa Museo Sartori in Castel d'Ario (MN); moreover, from 29 November to 23 December, the retrospective "Padre Natura" is organised at the Arianna Sartori Gallery in Mantua. In 2015, at the Casa Museo Sartori in Castel d'Ario (MN), from 19 April to 31 May, a painting is exhibited at the exhibition "L'arte italiana dalla terra alla tavola", an exhibition sponsored by Paglione Italia Expo 2015, and from 8 November to 20 December it appears at the exhibition "Mantova in Arte 2015, 1° regesto artistico mantovano"; from 5 to 23 December, the retrospective exhibition "Casa" is held at the Galleria Arianna Sartori in Mantova.
In 2016, at the Casa Museo Sartori in Castel d'Ario (MN), he appears, from 6 March to 10 April, at the exhibition "di Fiore in Fiore" and from 6 November to 11 December, at the exhibition "50anni d'Arte in Lombardia"; from 8 December 2016 to 12 January 2017 he is remembered with the retrospective exhibition "Mari" at the Arianna Sartori Gallery in Mantua.
In 2017 he is remembered with the retrospectives: "Laudato si' per nostra Madre Terra" at the Basilica Palatina di S. Barbara in Mantua, "Ricordi del Tempo" at the Torre di Redondesco (MN), "Terra Madre" at the Sala Consiliare di Mariana Mantovana (MN) and "Celate presenze" at the Museo Civico Polironiano di San Benedetto Po (MN).
In 2018, at the Casa Museo Sartori in Castel d'Ario (MN), he figures, from March 11 to April 15, in the exhibition "Art between landscapes and peripheries". Retrospective "Le stagioni del cuore", Torrazzo di Commessaggio (MN). In 2020, at the Casa Museo Sartori of Castel d'Ario (MN), he took part in the exhibition "Vegetalia tra Alberi, Fiori e Frutti".