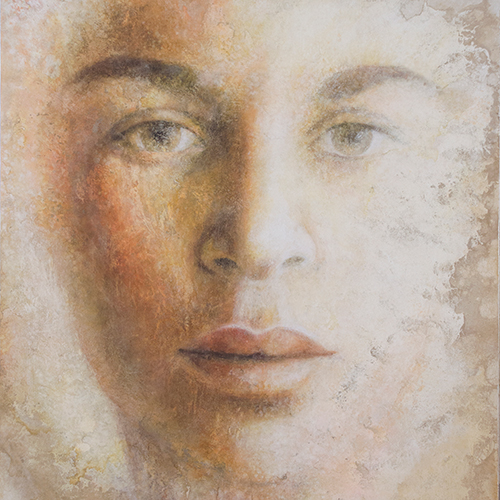 Stefania Orrù exhibits in our gallery since 2013.

Her first interest has been in literature and poetry; during the years of university before in Urbino and after in Verona, she discovered the painting as a expressive means, and it immediately assumes a central role in her life. In 1997 she moved to Umbria, where she worked for about six years with the master spellano Marchionni. it is in these years she approaches the fresco and mural painting, she does own those materials with which it develops today, her personal research. The years 2001-2009 were rich in events, travel, meetings, contact and exhibitions that culminated with the publication of a monograph entitled "Painting and the key-ness". Her mentor is the Memory, narrator friend, available to her lure of Beauty and Mystery. She translates for us and she paints revealing the charm. Stefania Orrù tries to represent the intimate essence of the Woman.

Stefania Orrù was born in Italy in 1976. Her first interest is in literature and poetry; during the years of university in Urbino and Verona she discovers painting as a means of expression, and it immediately assumes a central role in his life. In 1997 she moves in Umbria where she works with master Elvio Marchionni and where she approaches the Affresco and the painting of ancient icons. It is from these knoledge that she chooses the tools and materials with which she develops her research. The years 2001- 2009 are rich in events, travel, meetings, exhibitions, culminating in a solo exhibition with the publication of a monography entitled “La pittura e la chiave dell’essere” (“Painting and the key of being”), edited by Alberto D’Atanasio, presented in Rome at the gallery “L’Indicatore”. Among the major events in 2013 she is called in China, at Shanghai along with five Italian artists including Alexander Kokocinsky, Zhou Zhiwei, Giovanni Tommasi Ferroni, for the “Bridge of humaties” and the opening of the Museum of Contemporary Art of Zhujiajiao . She participates at the exhibition “Arte in terapia” (“Art in Therapy”) for the “Festival dei Due Mondi” (“Festival of the Two Worlds”), Spoleto 56. In 2014 she has a solo exhibition in Palazzo Medici Riccardi – Florence - organized by the Galleria Gagliardi of San Gimignano, edited by Alessandra Frosini, entitled “L’incanto dell’essere - Materia e/è Luce” (“The enchantment of beign - Material and/is Light”)., in 2015 "PRIMA LUCE" solo exhibition curated by Stefano Gagliardi  Galleria Gagliardi in collaboration with ArTodayEvents.