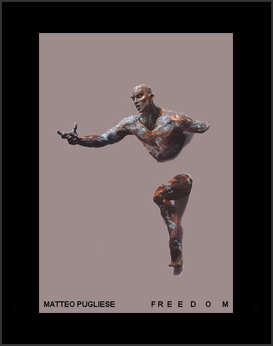 Even before I met Matteo Pugliese in flesh and blood, I met him in one of his clay forms, which was pushing its way out of a pristine white wall, tearing muscles, crying out in painful silence with eyes so wide open that they were about to burst…I looked at this figure for a long time, observing it from every angle and in every kind of light, as though hypnotised before that materialised cry – the beginning of flight, the utopia of salvation - that only a consciousness well trained to blindness could ignore and not recognise as its own reflection.I would like you to be able to devote one hour of your time to this new experience which is being offered, I would like you to shed every role, mask and self-defence and immerge yourself into this microcosm of white walls from which a face, or a face and an arm, and then a leg suddenly pop out, followed by a whole body wriggling to get free of the white flatness, in order to be born to the senses. There is no peace, no tranquillity or satisfaction; the end is movement, the destination is flight. Each new condition reached in the long term ends up by anaesthetising the senses, and these beings “damned to perpetual motion” have as their mission the infinite search for the Truth, aware that Truth with a capital “T” does not exist; we can only persuade ourselves that it is that “comfortable seat” in which we can let ourselves survive when we become too tired to continue our quest, too disillusioned to continue to nurture hope, too old to go FURTHER.In a word, he who does not take a risk does not live. He who does not risk does not fall. He who does not risk does not die and he can never be reborn.The most honest path towards Truth is not the “path of certainty” but rather the “countless roads of possibility” and the more we have the strength to explore, the closer we will get to MEANING, proud of our incoherence. What there is to feel, beyond the shapes, are emotions, the hunger for life and curiosity embodied by these shapes.And it is on this that I invite you to dwell and reflect and if the experiment works with you too, it will be as though you are in front of a huge mirror and once again art will have fulfilled its function: it will have succeeded in showing us reality, our reality, even and above all in its most painful and therefore more frequently ignored, aspects.And by opening our eyes, at least for a little while, art will have succeeded once again in making us freer.
And so Bon Voyage.
I will conclude with Charles Baudelaire who at the end of “The Voyage” entreats us: “Enfer ou Ciel, qu’importe? Au fond de l’Inconnu pour trouver de Nouveau”. (Hell or Heaven, what does it matter? To the end of the Unknown to find something New”).