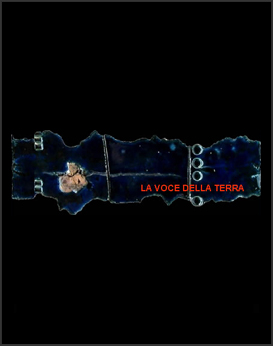 Carlos Carlé is one of that rare artists that don’t love to talk about their own works, both, for natural reserve, both, above all because they don't hold necessary to justify with the words what much is bossily expressed from their realizations.
For Carlé, matter is part of the historic cycle and becomes a readable trace of a memory that transcends the contingent extension of existence.Memory has left on the surface of his works abrasions, lacerations and wounds, structural rather that superficial signs of a narration that is turned into a form in space by the artist’s vital charge (and therefore his élan vital), capturing and returning time.The possibility to get himself the primary element, the clay, it approaches the activity of the sculptor potter to that of a demiurge.
“I do alone me the material, this it is my privilege”, he loves to say delineating the genesis of a process that develops in its making. The sculptor is also a ceramist, but for him ceramics is always a mean and never a goal, a tool used with a definite rejection for ornaments and easy results. As opposed to stone and marble, where the shape is obtained by removing the matter that hides it, he is , as defined by Biffi Gentile, a “builder”. In fact, the artist models clay by adding, which is to say by continuous growth, through a formative development of an architectural nature, which is almost organic. Carlé controls matter, and conveys its genuine might within primeval geometric shapes that harmonize the original principles of an elemental cosmogony: the reference solid shapes are spheres, circles, squares, and parallelepipeds. The construction of his sculptures is connoted by the dialectic between rationality and chaos, between inside and outside. The primeval and magmatic vitality restrained by coherent structures breaks out from lacerations, gashes and wounds penetrating the material body.The results of high temperatures applied to grés are rusty effects, crumbling, consumption and cuts recalling Alberto Burri’s corrosions, combustion and dramatic lacerations, as well as the great walls by Antony Tapies, his recognised master.
As for Tapies, running time sediments on the surface of his works and leaves marks that prefigure slow mutations occurred in a time gap that exceeds the author’s individual life.What Carlé seems to be saying with his megaliths is that the artist’s works are all about a faraway event yet aim to the future, and will outlast humanity whose passage on earth they will represent even when only silence will be able to contemplate them.Therefore they are anthropologic signs, documents, and as such memories and silent testimonies of mankind’s destiny, like dried trees in a stone forest.A single work gives a measure of the artist’s creativity, just like a pebble encloses the regulating principle of the universe.Carlè’s aim in carrying out his work is not to achieve an effect, but to satisfy an intimate need; each piece is unique and represents the sole solution, and at the same time it is a fragment of a whole. The artist’s hands and mind penetrate the circuit of time and history to capture its spirit and return it through his works.Carlè is a gatherer of stones. Time has modified their structures, water has smoothened and rounded them, friction has carved and scaled them modelling their surfaces.Carlé is at ease both in a small and large dimensions, and reaches monumental results in both.The recognition to world level and the appreciation of the critics, has defined the role of Carlé in the panorama of the contemporary sculpture.