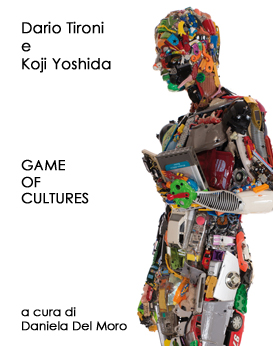 The two Artist Dario Tironi and Koji Yoshida have an other appointment with a new solo exhibition titled "Game of Cultures". The seat of the show is, this time, in an institutional setting and in a place elected Place of Culture: the Galleria Angelica (Biblioteca Angelica in Rome), founded in Rome in 1604 and the first European library open to the public. The material used by these two sculptors is waste material, objects that are part of waste and abandonment after the use, a rule that unfortunately still exists in our consumer society.

...”These sculptures or, better, ‘assembled installation’ designed in accor- ding to an order of composition ‘played’ on the presence of balance and harmony with precise rules of joints and unions. Iin this sense, their ‘installation built’ live in relationship with the "forms" of the real but declare their unrelatedness against the objective facts of a reality of abandonment, ...”...
From the text by Daniela Del Moro "The Adventure of Thought" In the catalog of exhibition "Game of Cultures" 2013