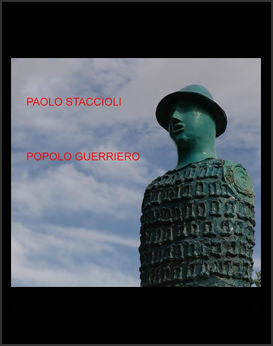 I believe that Staccioli's great ambition is underlined by his plastic art: that of a return to the Etruscan origins, re-appropriating, understanding, and confirming them. A certain - intentional- mystery surrounds these figures, constructed with a deliberate roughness, not too open in their hedonistic aspects, as happens with the vases, touched up by lumps of clay which are manipulated and pressed towards internal, hidden meanings and inaccessible secrets. The same thing happens with theheadlong falls of his horses, and their precarious positions on top of unstable columns, and together with them, the slight, sketched, unbalanced little figures of human beings. Let me repeat that Staccioli's ambition is extremely significant: that of pursuing an ancient world, the dream of antiquity, and of fragments of a civilisation which he intends to reconstruct by means of the indications of pictorial and plastic dremas. We must undoubtedly recognise that he possesses the right temperament to do so, if we also bear in mind all that happened in the last fifty years of "anachronism" in the world of the arts, which Staccioli approacheswith a primitivistic spirit.