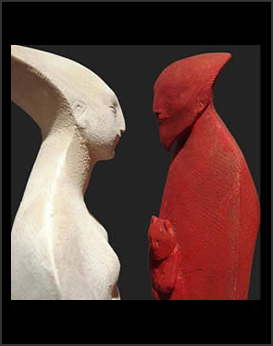 A parallel world’s inhabitants, half elf and half argonaut, where time mixes between past and future, giving life to creatures with strange appearance and tall colours.This is the world created by Wilhelm Senoner: These are wooden sculptures with lightly coarse surface, coloured by a miscellany of vivid pastel colours, flat figures from a front view, but, when we change the perspective, they offer a singular depth.Silent creatures observing the spectator from the height of theirs pedestals, as if they knew the secrets that they hide in the depth of their intimacy, a look that does not judge, but which would like to offer its complicity with a light irony.Wood sculptures softened by a skillful polishing, figures with edgy lines and colored by vivid pastel tones.Wilhelm Senoner sculptures depict creatures without time, without a well defined style; they present themselves to the spectator in an original dimension and changing prospective they acquire a singular depth, breaking all the exploited and usual schemes of contemporary art.