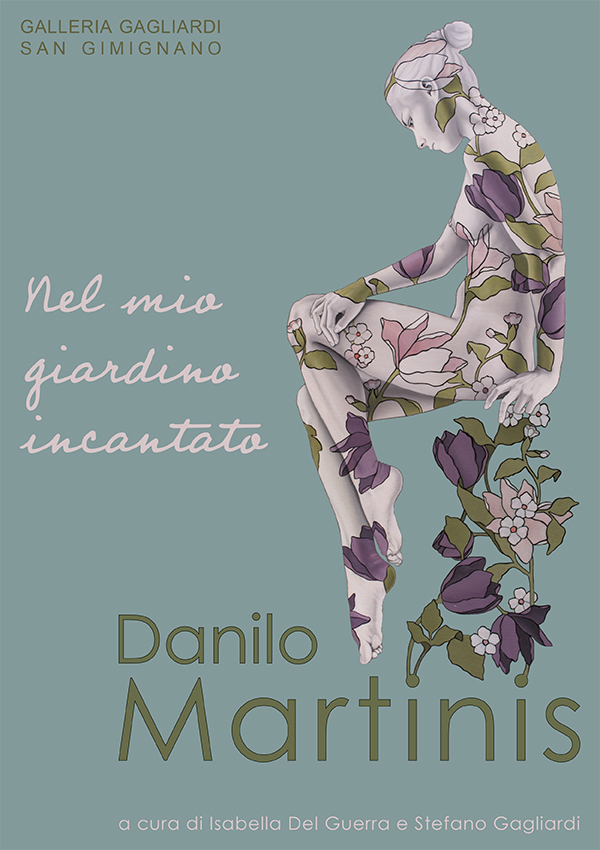 IN MY ENCHANTED GARDEN
Solo exhibition by Danilo Martinis
Galleria Gagliardi San Gimignano
from 21st July to 12th August 2018
Danilo Martinis has an important background of research and stylistic evolution behind him with an initial interest in Action Painting.
In 2005, Martinis evolved his style with a new form of expression inspired to OP ART, the Optical Art Abstract art movement born in the '60s and tied to the Kinetic Art movement which aimed at giving the viewer an experience of an optical illusion and of perceptual instability where the human figure isn’t considered. Martinis, however, interprets the Op ART in a personal way, introducing faces and figures that are mostly female and drawing their bodies so that curves and straight lines intersect, transforming them into figures suspended or immersed that merge with the background of the painting and create a perception of concave/convex, as if they were in continuous movement.
2018, Danilo Martinis opens, with the personal exhibition "In my enchanted garden", a new pictorial cycle, leaving behind the geometric/dynamic style that has accompanied him until today to find a freedom of line and pictorial construction. In this new phase, it's as if Danilo Martinis feels the urgency to transfer, into his paintings, his lived experience enriched with new existential realities: subjects are released from forced immobilization and are freed from the geometric cage, they dance finally free and light. The geometries are broken and the definite lines open and slowly change into soft and supple thread and then turn into stalks, leaves and flowers and, magically, Martinis makes us almost feel the scent.
Martinis leaves the strong colors that have accompanied him in recent years, colors and lines that inevitably stiffen the bodies, even if sinuous, of the women represented: in their place new pastel colors, in light graphics, in harmony with his new vision of a mild world and delicate; now her women, sweet and gentle but strong and proud, dance in solitude, in a silence that strengthens even more the union and the empathy with the nature that surrounds them.
In his latest works, Danilo Martinis, develops the theme with symbologies and multiple contaminations: the garden, in its symbolic meaning, brings us back to nature, whereas the enchanted garden to an uncontaminated place, to a sort of earthly paradise where the luxuriant nature corresponds to abundance, to joy, to purity; in oriental culture, the garden represents cosmic eurythmy, the bond and balance between nature and man through which to achieve a state of serenity and inner balance, in fact the techniques of meditation to regenerate body, mind and spirit, often they start with the image of an inner garden.
The canvas space magically becomes a stage where female figures, the far eastern inspiration, moving silently, fascinating and seductive remembering shadow puppets; flowers, the symbol of life, envelop the bodies or cover the light garments; the big Moon recalls the scenographies of the lyric theater or the scenographies of the Renaissance; the dancers let themselves be carried away by the nature that surrounds them, from the lyrical and dreamlike world in which Martinis, with his profound sensitivity, invites us to enter on tiptoe.
Everyone yearns for his own "enchanted garden" in which to escape and forget this confused and disoriented world, deviated and deviant, a place of peace and serenity where to finally find the possibility to think. And here the artist translates for us a dream in image, a garden where lightness and serenity are revealed.
The painter, the creator of dreams, offers us the delicacy of a dance step, the enchantment of an enchanted garden where harmony and poetry meet.
It is a place where you can rest your heart and mind and drop the weight of the world.

Hush. On the threshold
of the forest I do not hear
words you call
human, but I hear
newer words
spoken by droplets and leaves
far away. (…)