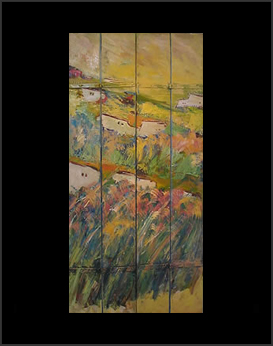 Look at an artwork in silence. Eyes search, Mix sensations, translate what is hidden between the signs of` colours into sensible language.Every artist has a silent voice by which he dialogues with his own spectator; just as the musician, through sounds, expresses his most profound and intimate sensations. The artist uses colour and signs to take spectators by the hand and carry them to a world where reason and rationality are excluded and where full liberty and silence induces to introspection. This is the world of` Sandro Negri, where colours are dense, full, warm, thick, saturating space with vibrating and enveloping density. Light plays on the crest of` the colours, sending us lashes of` glares and reflections and involves us I in this living and palpitating work. Nature, and with Nature man, are the main themes of the works of Sandro Negri.Nature is a protagonist, simple in her complexity but also seductive. Told by the Artist with great participation. Changing seasons, rigid Winter making the ground hard, fields solitary; with trees burnt by l frost, with silent snow covered landscapes. Timid and light Spring with delicate flowers just blossoming on fruit trees in the gentle light of this magic season. Magically he helps us to sense the odours. Lush Summer Nature that he expertly paints with material thick colours, flaming lights, joyous blotches of` colour generated by poppies in fields of ripening wheat, where we look to the horizon where man prepares the harvest in his farmhouse. And finally Autumn, light melancholy rows of vines burning in ochre, yellow and orange, giving birth to juicy bunches of grapes ready for harvest while light becomes golden.Man, in his paintings, is dedicated to the agrarian fatigues of an epoch that is increasingly distant from us, going away and becoming a part of our memories. People used to working in the fields, with dignity and tidiness, working with Nature and extracting Her fruits. The silent humanity of unmoving time, performing its labours with precise terms dictated by time that Nature Herself imposes. People used to fatigue, tempered by the sun and the wind, but with an interior peace that is typical of those in peace with the world and in harmony with Nature. Men and women painted with “non facial faces”, without features, without distinctive characteristics, as though the artist would represent all of humanity with a single man and a single woman. Mute faces that radiate energy.Outside of the drama of fatigue, in a friendly land, grateful for the work that was done. His paintings figure chairs and doors under flowering bowers, facades worn by time and the sun, windows ajar with red geraniums, old doors that hint of the life behind them, the odours of fires, bread, wood; strong odours. Courtyards where farmers, in the evening, abandon the tools of their just-finished labours, glimpses of towns with peeling walls and ingenuous graffiti. Intimate perceptions of this ancient world, painted without reflection, with fat strokes in an attempt to fix these memories, without paying attention to perspective, proportion nor to aesthetics in the classic sense of the term. Perfect balance and harmony where everything brings a life nostalgically to us and our memories go back to a person, to an event. The strength of poetry. The paintings by Sandro Negri have this magic. We are not in front of his paintings but rather inside them. We walk between the furrows, the rows of vines, crossing fields and caressing golden harvests with our hands. We sit on a boulder before the sea, losin ourselves in the horizon with the colours of a fire-filled sunset. Our minds are released as we observe waves rocking two solitary boats, wind filling their sails, wind that holds us there, waiting for imminent thunderstorms. The sea is another favourite theme of Sandro Negri, where he makes light dance above the colour, where he gathers the strong energies of life in a brush stroke. The Sea. Here man is usually absent with  the exception of a few fishermen arranging their nets after their labours. The traces of man are found in boats pulled up on beaches for the night or abandoned, old and useless, to the aggression of brine and time. Boats that furrow the waves in solitary regattas.  Nature is imposing, present, strong in these works. A scene that is sometimes immobile, waiting, where rocks seem the sole spectators.  Other scenes where a furious sea shows its power with foams that attack the rocks. A sea with soft and rarefied colours, calm and in contemplative silence. A sea furrowed by haze-hidden waves with dark skies torn by the whitest of slits, ready to join  together in a perfect tempest. Silent sunrises with silver and gold reflections on a calm sea awaiting the sun. Sandro Negri lives and involves us. His strong strokes, contrasting colours and material paints give homage to a dreat sea, underlining and emphasizing its immensity and power. Skies travelled by elegant seagulls that graze the waves in search of food. And, finally, emotional sunset where reds mix with violets, the golden sun and the deep blue of the sea.  Red waves, almost black, in a festival of colours that reveals passion for an art done with love and with Lust for Life.