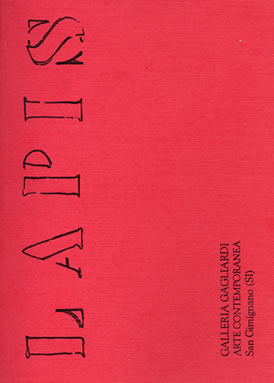 In 1790, at the dawn of modernity, Kant wrote in his Critique of Pure Art that “In painting, in sculpture and in all figurative arts, they being beautiful arts, drawing is the essential element, where my assertion of taste does not rely on that which delights in feeling, but on that which pleases simply for its shape”. The statement could easily be mistaken for a tardy recollection of the neoplatonic conception of drawing - the sensitive trace of an idea - that reigned over theories in art since the sixteenth century. Obviously it is not so, the philosopher is interested in man reacting to the world, and not in what is supposed to be beyond it. The supremacy of drawing over colour (the quality of which is “attractiveness") sanctioned by Kant should rather be inscribed in the “primativist” climate of Neoclassicism, in its antibaroque anxiety about simplicity and synthesis. The distance from Klee's idea of drawing as “creative confesion” is not all that sensible. The expression signifies a penetration into the aurorl moment of creation, bringing the artist face to face with the ethical and noetic essence of the production of signs, elementary, powerful catalysts and filters of inner life.
At present, art seems to be capable of producing nothing but simulacra (exactly in the sense of copies without originals) of finds abandoned by the blackwash of the system of commodities - besieged from all sides by the overwhelming production of mass media images, valiantly striving for survival. In this climate, an exhibition like LAPIS takes on the value of a proposal. It is a matter of opposing the garish luxuriance of icons that surrounds us, nourished only by the present, with a still heart anchored to the absolute creativity in art.Matisse wrote: “In the same way that we move our hands when we speak of a melon to express it with a gesture, so must the two line that define a shape render it. Drawing is like making an expressive gesture, with a permanent duration”.
When the pencil approaches the surface of the paper, in an eternal return, it revives the encounter with the empytness in which all art finds its origin. The primary event of the contact between sign and surface incites the vertigo of possibilities it is founded on. On show, through the works of numerous notables artists, the open fan of manners and trends that spans 360 degrees can but confirm how the entire expressive experience, how each expressive experience, originates from a small primordial core in which designing dimensions, expressive emotion, the wish to define through introspection the moltem magma of personal individuality are not different facets of the same thing, but the same thing indeed. Drawing has elucidadn this concept in this century, it is not the essence of art in that it belongs to it “a priori”, but because it is part of a system in which it constitutes a sort of unconscious, of experimental and design laboratory, atonomous and heteteronomous at once. And still, in 1995, the line, the spot, the sketch, the shading off from one colour into another, their adaptation to the grain of the paper, have a fresh, potent scent of chastity; of wise simplicity that has all the strength of utopia, of what is manifest.