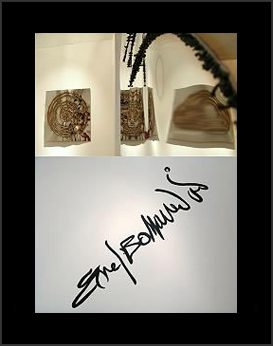 literally, writing of time and space. Cronos and topos; time and space, but also space-time “dimension” of painting as acceptance of the condition of doing or the existing condition of the act of painting which is being done. Poetically. This “dimension” (according to its meaning of “level of pictorial reality” with its own time-space coordinates and, therefore, its own specific characteristics) introduced by Bonamini’s painting requires several clarifications. First of all Bonamini’s space-time element relates neither to “memory”, nor to successions (past, present, future). That which implies some sort of indifference towards styles, tradition and even formal origins but also an original mark in comparison with those experiences which have represented time as matter and which are a central tool of pictorial research (Opalka, On Kawara). Because what concerns Bonamini most is the urgency of an intervention which burns itself out (physically) here and now, with no before nor after, which wants to expand in a succession of simultaneous events, according to some sort of eternal present or eternal return: this can be a sign executed in the voracity of the race against time but it can also be a painting of the background produced during a slower period of meditative calm. Therefore Bonamini’s space-time element is equivalent to a musical metronome and his painting is an arrangement of the variations on a theme by Bach or Philip Glass; the persistence of the spiral motif represents a place and a time projecting towards infinity (with all the consequences arising from a leap from “measure” to “dimension”), even given the uncertainty of action and the limits imposed or, perhaps, just because of those. If things stand as they are, some themes must be drawn from Bonamini’s poetics. The hidden yet perceived tension mentioned earlier can now be explained and specified. This type of art comes alive in the contrast of different space-time elements and in the continuity of the spiral motif, between the finite of each section of painting and the infinite of the spiral: each painting or section of painting finds its own alter ego in the “opera omnia”, in the whole produced with no solution of continuity by the artist; the fragment longs to integrate with the whole, while still being a fragment, a part. If the latter is inevitably tied to its own status, the work lives in a breath which is not given by the sum of the pieces which compose it. If one finds perfect coincidence between the space-time required to execute it and the space-time which dominates and defines it, the other lives in doubt, in that “opaqueness” (as Miccini and Jakobson would put it) which holds the mind on the magnificent absences of truth.