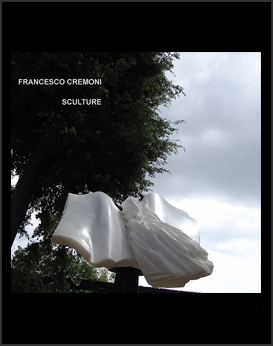 In the feeble steles exalted to celebrate the generative principle, Cremoni reveals a subdued sense of sacredness. This is already given in the archaic ritual of the nailed stone, almost the concretion of a sun-ray, a vector of energy or polarizing magnets, the vital entities being dispersed in the cosmos. But little remains of this magic and apotropaic virtue of the stones in Cremoni’s steles. They are of such a purified plastic quality as to reach symbolic meanings; they are figures evoking a kind of spirituality and culture which we would call oriental, for the high degree of formal synthesis between the minimum naturalistic referent and the conceptual content. It is important to reveal how Cremoni, then as today, reserved a special attention for touch values of surfaces, taken to a certain finish which, while not passing over to icy formalistic perfection, is maintained at an extreme limit of exhaustion. And the margin of the intimare emotional and spiritual or rather poetical adhesion of the artist is within this limit during the creative process which activates, with discretion and trepidation, each aspect of his personality.