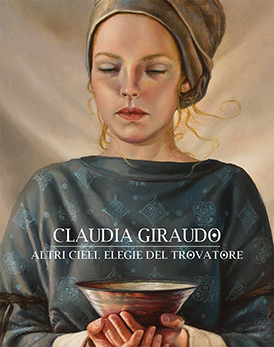 ther skies
These are skies where stories are told, where the stories become images of thin perceptions. These are the skies of yesterday, they are the remembrance of that time and of that place which is left at the end of the journey, and that we want to remember whilst the soul regains its lightness, almost as if to compose itself in the nostalgic melodies of the colour and in images, as if generated by the sound of a lyre or a flute. These are the skies of the poet who chooses woman to be his muse, woman as mediator of the absolute. These are the skies of the troubadour, of the poet who sings and puts his love in prose. While in the Holy Land Christians and Muslims were engaged in bloody acts of vengeance and unprecedented genocides, in 1219 Saint Francis left the court of the Sultan of Egypt, Al-Malik Al-Kamil, taking with him a set of precious gifts: in addition to the horn used until his death to call the faithful to prayer, the fortuitous privilege of accessing new dimensions and paths for renewed spirituality. He took part in important conversations with the highest Sufi masters, consequently gaining access to esoteric knowledge. After these encounters, Saint Francis set up in Italy the Order of Friars Minor, thus twinning with the Sufi’s Order of Greater Brothers. During the same period, on the other side of the Mediterranean Sea, Frederick II, Duke of Swabia, engaged in a frequent epistolary correspondence with the aforementioned Sultan, dealing with a wide range of topics, discussing scientific, mathematical and philosophical problems. Thanks to this collaboration, Frederick II was able to have the Arab versions of works by various Greek authors, including Aristotle, Plato and Ptolemy, translated into Latin. Along with these, solutions to mathematical problems, knowledge of medicine, anatomy and astronomy were finally shared by the two worlds, the Christian one and the Muslim one. So much so that, from the far-away Iranian regions, from Syria, Egypt and Morocco, up to the entire Iberian peninsula and to the South of France, a new way of conveying culture originated already in the year one thousand A.D. Driven by a deep desire for knowledge, in all sectors of literature and science, dozens of centres  specialised in archiving and debate sprang Other skies Stefano Gagliardi up all over; so it is no accident that Frederick II of Swabia, the most Muslim of the Christian kings, was the one to inaugurate the first European laic state university in Naples, and he did so outside the influence of the supremacy of scholastic philosophy and of Latin as the official language. Frederick II was also responsible for opening a famous school of Sicilian poetry in Palermo, the first real cornerstone of the budding Italian literature. In the twelfth and thirteenth centuries, the skies under which Man could aspire to a deep regeneration had changed: other skies witnessed the rising of new figures in search of renewed dimensions of the spirit and of poetry, with the absolute leading stars being, without a doubt, the troubadours and the jesters. During their travels from city to city, they exercised the arts of song and poetry, told cultured, funny and ironic stories, and reported events and accounts which they had witnessed in other places. Everything took place in the squares of the towns the jesters and the troubadours travelled through, after which they gradually infiltrated the palaces of the nobles, who also yearned for exotic knowledge. In order to make themselves understood in the lands they travelled to, they spoke vernacular, creating new words more suited to the people’s speech, thus actively contributing to the birth of languages increasingly vitalised by larger and larger populations and territories. All this had a beginning: thanks to a few Islamic brotherhoods of mystics called Sufis who had chosen a life of poverty. These mystics possessed nothing and at the same time demanded the freedom to not be possessed. Islam’s powerful men submitted themselves to their wisdom. The Sufis wore a garment made of wool that, as it became worn with the passing of time, would be systematically patched up with other pieces of cloth of different colours. In some ways, that multi-coloured robe became, through the years, the preferred costume of the troubadour-Sufi and of the jester. That garment belonged to the singer and to the storyteller, as an identity to be preserved even against the rigid culture of the warrior Popes who saw, in this renewed laic mysticism, the danger of an unmanageable and constant heresy.