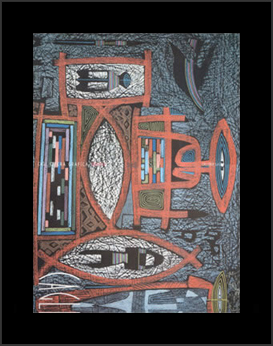 Presentation
With the exhibition of the graphic works of Corrado Cagli, we want to start and promote a first cycle of anthological meetings which we will dedicate, year after year, to the most representative artists of the Italian '900. The first of those appointments it is now at its beginning: the catalogue, the setting of the works in place, the about 50 monographs on the artist and the collection of many historical and photographic documents are already made.This exhibition was much encouraged and supported by the permanent pool of artists already showing their works at the Galleria Gagliardi. All of them, sharing the wish of the management, thus want to underline one of  the most important aims of this Centre, which is the promotion of the artistic message through the works of those who dedicated to the Art itself their whole life. Cagli is one of those.This offer of a meeting point out of any  commercial circuits for artists, critics and members of cultural committees is an attempt to achieve the most of the national and international attention and interest for the Art of a great Master.The answer of critics was immediate and they greatly contributed to this project: the critical profiles of Cagli contained in the present catalogue deepen and explain the meaning of Cagli's works, with reference to his Art and his time. From his works it can be perceived a multipolar dimension, in time and space, of his inspiration themes, either social, cultural, literary, esotheric, religious or spiritual. And for critics? Maybe they cannot do other than verify the choices of a talent that aspired, with its never ending research, to coniugate the man with his past, his present and, why not, with his divine. For this reason the artistic journeys of Cagli are made, after all, by walking along the same only path, the Tao of a whole generation of artists "condemned" to search the truth not only inside their own expressive talent, but also by exploring the fields of parallel cognitions. Their doubts enlightened their art, the wonderful  certainties that they reached became their destiny. The alternate subsequence of these two elements might be one of the ideal traces to follow for the interpretation of this exhibition. A fundamental contribution to the exhibition comes from the following public administration committees: Regione Toscana – Provincia di Siena – Assessorati alla Cultura e al Turismo, Comune di San Gimignano - Assessorato alla Cultura. Such cooperations testify the will of Public Ministries to experiment, in a correct and synergic partnership with a private organization, the polarization of a wide range of cultural happenings in the town of San Gimignano.
This exhibition, therefore, becomes a preliminary step towards a renewed cultural policy in view of a wider program which can be extended to the whole Val d’Elsa and the Siena area. All of this was possible thanks to the "Archivio Corrado Cagli" which is under the direction of Comm. Francesco Muzzi, an always available and reliable partner, precise and careful, who offered his valuable help to organize and settle the huge amount of graphic works and documents shown in this exhibition.  Moreover, with his precious advices and suggestions  helped us to gain a great return of consents, otherwise difficult to achieve. To the "Archivio", therefore, we owe the privilege of contributing to the diffusion of the great cultural and artistic inheritance left us by Corrado Cagli. Special thanks to Mrs. Jole and Serena Cagli for their confidence in our efforts.