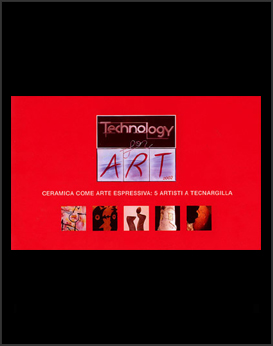 Federico Bonaldi :ANCIENT SOUL
When I am in the company of Federico, as I gaze at his works with a sense of enchantment and wonder, I often have the feeling that I am in the presence of an ancient spirit, one of those rare souls that have been sent back to dwell among us once again. Federico is a solitary man. His moods are unpredictable and he is sometimes quarrelsome. He would have a lot of things to tell you, but if he can he avoids speaking. He has an aversion to questions, like anyone who has experienced too often the tedium and insignificance of the responses. He has lived many lives and knows that he must die once again, perhaps with enormous suffering and unboundedmelancholy. He has travelled a great deal and experienced cultures that are different from our own. In him the wisdom of the shaman lives side by side with the naivety and the irreverent curiosity of a child. Now he travels very little. He does not enjoy being amongst people, but prefers to work. Every day he spends his usual ten hours immersed in his work in a small and chaotic atelier crammed with ceramic creations that each year he is more and more reluctant to part with. The radio drones continuously and keeps him company while he reads, draws on blank sheets of paper or works clay. There are scores of drawings, some of which spill over onto the floor, a tumultuous and humoral testimony to a quiet and solitary spirit. There are blank sheets relating days of doubt and hope through a continuous exercise of memory; pages filled with rapid sketches; implausible written texts like genuine labyrinths of existential malaise. Without precise deadlines (which he hates), Federico sorts through his drawings, transforms them into ceramic elements and assembles and recombines them into autonomous works. His sculptures are often a learned and never random combination of countless stylised images – symbolic, fable-like and erudite. The references to Zen practices and Buddhist, Taoist, Tibetan, Jewish and Christian thought are in many cases explicit. Signs and symbols intertwine in an inevitable interdependence of graphic design and substance: good and evil, life and death, love and hate, joy and suffering become inseparable and intrinsic dualisms in human becoming. In other cases, the images tend towards esoteric representations testifying to truths that can only be known through the practice of silence and meditation. They express fleeting hope of ultimate salvation. A frequent motif in his work is a face with a finger covering the mouth, a symbolic gesture of Sufi origin that represents truth in silence and the vanity of works and excessive knowledge. Although Bonaldi does not like to talk about himself, many of his works are fragmented images from his existence and his memory as a man gazing at everyday objects and daily life. In this cycle of works, the world of sentiment and emotions takes material form in the magic intertwining of a myriad of everyday objects and a poetic representation of people and situations that are dear to him. With nostalgia and affection he remembers his mother, his grandmother, his lost games, small objects with the magic appeal of water. He remembers love, letters left unwritten. He remembers when everything was simpler and a wish was sufficient unto itself for the simple reason that it was expressed.

Monica Borca::PURE THOUGHTS
Monica Borca is a woman who lives in the present, accepting that every day brings with it death and rebirth. This does not conflict with the challenges required for realisation, which for her remains synonymous with change, growth and evolution. She lives and becomes with simplicity. Her hands are plunged into clay and her heart is ready to decipher even the smallest emotion. As her hands work the clay, her gaze turns to the close horizons of her daily world of emotions, to her various roles as a woman, mother, companion, artist, daughter, sister, friend. She lives out a microcosm of relationships in which human values add together rather than cancelling each other out, a universe to her poetic imagination. Monica Borca is a woman artist and sculptress who loves to portray love, the sentiment of love. Whithin the cycle of sculptures entitled TAO, for many years now, she has been creating pairs of anthropomorphic pots of rare beauty and poetry. Each of the two parts needs the other in order to live, the male recognisable by the protective gesture of the shoulders, the female by the affectionate forward movement of the hips. Although not touching, the two parts are intimately connected; while they seek their own individual equilibrium, they attract each other like souls that are destined for each other. They are spirits dressed in dark, opaque clay, clay that has been delicately scratch decorated and imbued with unique luminosity. They testify to love, to the Tao, to the broad road, and remind us that by living in the fullness of this sentiment we are all Taoists without being aware of it, through a choice that is fundamentally not a choice. She loves to represent the mystery of becoming, the process of realisation and self liberation, which for her is never individual but intimately connected with the presence of the Other. In the cycle of sculptures entitled Contatto, the link with the Other becomes dynamic and generative, and in a certain sense indissoluble. It is the destiny of human beings to search for each other; the reward of reunion is to overcome individual identity through the possibility of perfection and thus reach a state of greater serenity. This can be achieved only if fuelled by sheared sentiments and mutual devotion. As in a game of mind and reality, the two shapes - through their mutual contact - germinate by enchantment a third figure in the space between them: the promise and reward of another higher identity. If the shapes do not meet, then contact is not made and the shapes lose their meaning, aquilibrium is destroyed and the sculpture vanishes. Monica Borca is a sculptress who loves to represent emotion and emotion and believes in the language of the body and gestures: emotion as a transitory state of the spirit, gesture as poetic opening out of the body into space. In this case her "Elemental Women" are represented in a group and occupy a space that is freely determined by the observer. They appear to evoke sentiments of subtle agreement and silent coplicity; They live through timeless sequences, still frames of metaphysical astonishment. Monica Borca's "Elemental Women" are spirits dressed in clay. They are an inherent part of the earth's femininity and, shaped by the sculptress, become bodies with harmonious sinuosity of gesture and movement. They have  th black skin of raku figures and in their long garments appear to relive the yellow of the sun that has dried them, the blue of the sky towards which they all seem to be reaching out , the sea green and luminous grey reminiscent of the water and air they lost in the battle with fire during their chemical creation. They are named Earth, Watre, Air an Fire, like the primary elements of ceramic alchemy and the fundamental symbols used in Taoist thought to signify the circular process of life and human becoming. Every kind of conflict in the combinatory dualism of the elements is a necessary condition for one's own transformation in harmony with the laws of change. The "Elemental Women" are spirits that seek each other out with a secret need to reunite.