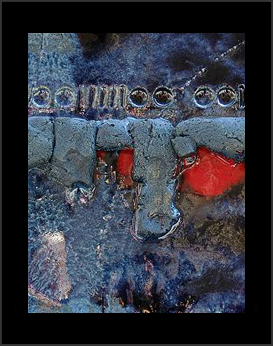 The content of the work of Carlos Carlè has its rootsing a sort of anamnesis, in the research of o both far past and present. for this reason it arouses echoes of unknown memories of a dense world without time. The capacity of evocation exercised on the audience is peculiar of the great works of art. How can Carlos Carlè influence us to such an extent? The answer is the same for all the artists who have a place in in the history of art. He can melt the sense of form, of colours and of technique in his works which are based on two primary geometrical figures: the plane and the sphere. He works the surfaces of the figures with a great wealth of details. The “skin" of the stoneware turns into a microcosm where the colours of earth, glazed in grey anthracite or dull tones, play with the relief and, at times, with a blue tone full of astonishing poetry. Both the big and the small pieces express an atmosphere of restrained Monumentality, a severe and fine sense that makes them one of the poles of attraction of European ceramics today.