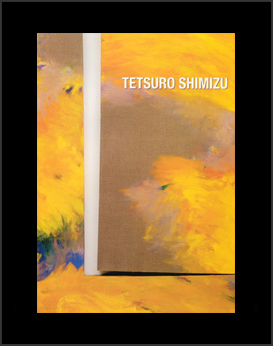 SPAZIO PITTURA
The work of Tetsuro Shimizu begins with a solid knowledge of the Informal lexicon to shift almost towards a negation of the same.The artist uses a painting technique that knows its collation well and constantly enters into confrontation with a research prospective. If texture aims to create an effect of density and movement through use of colour, the structure of the works tends to take on a direction of escape and fragmentation of surfaces, which cools and denies the pictorial enterprise. The very immediacy and splendid brutality of the Informal style sometimes enters into conflict with a definition of visual spaces that splits the original unit. If gestural painting possesses the characteristic of bringing immediate representation to thought and emotion, Shimizu knowingly breaks the unit of place and action. In this way he creates conceptually elaborate works in which the composite idea is calculated and never entrusted to the casualty of the moment. This is why his work is always interesting and new. Space is not abandoned to the flow, retaining its fullness and strength. Space is relaunched in a shape which is closed yet suitable for modulation. And this is a stylistic method which is closer to figurative art or that of strictly decorative origin. The same poetic nature of the fragment requires a "whole" to refer to, in other words, there has to be an original construction to act as a paradigm. There are also cases of modularity in which the fragment is programmatically functional in terms of permutation. In painting in the Seventies it was possible to move around a work divided into various segments, obtaining something which was always different and something that the artists could have planned within that combination. Tetsuro Shimizu’s answer was to think back to the tradition of intense painting released from figurative references, changing the setting.The setting of each individual work becomes a choice in which, in a manner of speaking, painting assembles different spatial situations. The fragment achieves a physical and visually involving identity, from an idea of a pictorial sign that unites the surfaces in a single idea. I believe that the artist, beginning with the awareness of the crisis of the informal linguistic model, has supplied proof as to how to move on. This happens as he continues to believe in and disseminate the value of painting, in an increasingly media-oriented and intangible universe. In other words, painting, and this painting in particular, still has an enormous value to disseminate. Tetsuro’s works leap off the wall, paying no restrictions to the wall, desiring only to fill space. If the segments of the works leave empty spaces and cracks, the idea of the painting fills them. Therefore uncertainty become temporary and makes contact with the spectator. The artist creates a hybrid, poetic and undefined space in which the elements of the work suggest a common language. Paradoxically, but then art is composed of mechanisms of this type, this inability to decide strengthens the work, becoming its conceptual support. Display the crisis and limits of painting to strengthen it and trigger its refoundation. This only happens because the artist entirely possesses the language and is able to create thicknesses of colour with continuous, rapid and incessant movement. Quality is out of the question, otherwise it wouldn’t be possible to speak in these terms. The presence of this efficacy becomes apparent exactly in those which can be referred to as the crisis points of works; in those points in which the artist’s arrangement of the segments leaves room for further visual possibilities: to look beyond the picture is one art’s greatest dreams. The composition becomes a dialectic pole of signs and colours. Warm shades of red, yellow and green bursting with psychic and visual energy.From the overall definition, from the negation of dimensionality and the interstices sought after by Shimizu, chromaticity possesses a singular force of attraction. Colour takes on the role of the magnetic field of the gaze, flanking the idea of painting, as the main structure of the work. The result is that of revealing the considerable possibilities and extensive spaces that intelligent artists are still able to find, to link the act and the gesture of painting with that of thinking.

Valerio Dehò has studied Aesthetics with Prof. Luciano Anceschi and Semiotics with Umberto Eco in Bologna. He graduated in Language Philosophy 1979. He now teaches Art Education and Pedagogy at the Ravenna Academy of Fine Art. He worked on the “Novecento” Project for the Borough of Reggio Emila from 1997 to 2000. He is currently employed as curator at the Kunsthaus in Merano (BZ). He directs the “Click Art Museum”, an on-line project linked up to databases on art i Europe. Since 1980 he has handled 106 contemporary art exhibitions in Italy and abroad and published 21 editorial monographs. He works for the art magazine “Juliet” and has written for the main Italian art magazines.