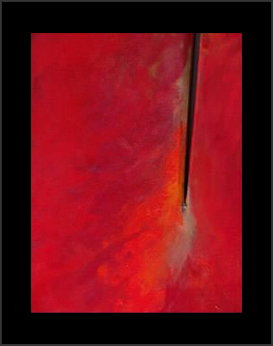 Many years ago, at the opening of the first Shimizu’s solo exhibition in our gallery, a beautiful butterfly rested upon one of his paintings with various yellow-orange tones and slowly assumed its chromaticity.

We got fascinated by this little miracle and we interpreted it as a good omen for the future collaboration.

Since 1997 many years have passed on.

During his artistic path, Shimizu has never lost sight of the continuous research in the relation between color-emotion, matter-vibrant energy, always maintaining, in all of his works, a constant dualism.

In time,  the spatial construction of his works has modified. His first paintings were limited in a unique or paired frames to form geometries circumscribed in squares or rectangles. Lately the paired frames were interdependent, but their combination created some gaps.

Some times the chromatic wave self-pursued, giving a continue sense to the color spirals, other times it was rejected as if it found an obstacle.

Ultimately the works return to be mostly with a singular frame, maintaining the shifts but  with a new important introduction: the cut.

Provocative element denying to the surface the peculiarity of its own entirety, upsetting the harmonic balance and disorienting the spectator.

This new factor, which interrupts the pictorial plane, gives to the painting a new dynamism; the matter meets with the void in which creates a whirlpool.

An element attracting in a crack in which it will get lost or conversely, from the split it will reborn, giving life to the color's energy: the canvas' cuts create an extraneous force to the painting, deliberately suspending the gesture harmony.

The chromatic palette of Tetsuro Shimizu bases on primary and intense colors, the miscellany of these and theirs many drafting become an hymn to polychromy, but even the not painted rough canvas has its painting worthiness. Red gradations join to purples and turn to orange, blues mix with blacks leaving patches from where greens and yellows come out creating strong contrasts;

Sometimes painting leaves space to canvas: suddenly barges in as if it precipitated in an abyss: other times it exhausts like a wave on the shore, generating a play between depth and surface, light and shadow.

In front of this chromatic jubilation, we can perceive the harmony.

The color movement creates energetic vortexes and, as in a concert, the multitude of sounds fuses in an harmonic outfit but keeping intact its own peculiarities, equally the colors never renounce to their own specificities, even if they mix, cover and release.

As in an archaic code, the primary colors wisely used, induce different frames of mind.

At a first reading we could say that Shimizu realizes his paintings in a gestural way, following the emotional immediacy, but observing the structure, the numerous color drafting, the chromatic succession, we make aware of how his works are meditated.

An inner discipline forces him to prepare an accurate preparatory sketch in which colors and brushstrokes are carefully performed following precise spirals.

Basing on the project, the Artist rigorously alone prepares the handcrafted frame: stiff in the skeleton but provided with a sinuous shape according or contrasting to the painting flow that will host. The structure is a fundamental part of his work: the perimeter may be concave or convex ( in some cases the same side has opposite bends), the external lines are completely asymmetric, the perspective distortions; a borderline which seems to compress drawings compelling them to a sharp inversion or in other times it invites them to an expansion giving them a further space.

The three-dimensional shape of the frame the painting in an event of painting-sculpture.

Through the fading colors, the painting interacts with the wall on which is hanged, even if keeping its own identity and autonomy.

The creative process continues with the proactive realization: after a meditative concentration the Artist faces the gestural action which is fast but never casual, ordered by an interior feeling, by an emotion.. The result is a never static work made up with opposite forces, centripetal or centrifugal, converging and diverging: spatial energies entering and exiting the painting, involving the observer.

These paintings cause frames of mind which are similar to the music, deeply  beloved by the artist: they set free visual sound, aroused by chromatic emotions.

Each work invites the public to trespass the abstract threshold and to enter the infinitive and constantly moving universe, to hear its sounds and silences.