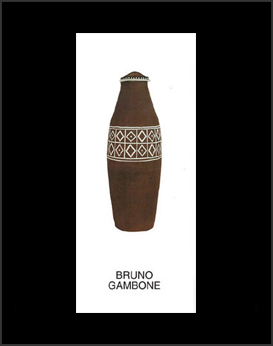 Bruno Gambone was born in Vietri sul Mare (SA) in 1936. At the age of fourteen he began to have his first contacts with ceram¬ics in his father's Florentine workshop. In 1963 he moved to the United States where he was engaged in painting, sculpture, cine¬ma and theatre. He frequented artists such as Robert Rauschenberg, Roy Lichtenstein and Andy Warhol. In 1968 he returned to Italy and settled in Milan, where he got to know many people in the artistic world, including Enrico Castellani, Lucio Fontana, Paolo Scheggi, Agostino Bonalumi and Gianni Colombo. In 1969 he returned to dealing with the ceramics sector. He is a member of the Consiglio Nazionale della Ceramica. For a decade he was President of the ASNART (National Association for Artistic and Traditional Craftsmanship), of which he is now the Honorary President. His major shows include: Concorso Nazionale della Ceramic° d'Arte, Contemporanea of Faenza (1971, 1972, 1974, 1975, 1977); Venice Biennial, Mostra delle arti decorative 1973); Milan Triennial (1973); Munich Fair (1973), ENAPI gold medal; Concorso della Ceramica Mediterranea, Grottaglie (1974, 1977) prizewinner in both editions; Biennale nazionale della ceramica d'arte, Reggio Calabria (1981), where he won a prize; "Design of the 80s" at the Museum of Contemporary Art of San Diego at La Jolla, Cal. (USA) and the Museum of Modern Art of New York (1982); Salone internozionale della ceramic°, porcellana, vetro at the Fiera di Vicenza (1984) where he won a prize; National biennial exhibition "Piatto di Ceramica", Asti (1985), where he won a prize; Mostra della Ceramica, Castellarnmonfe (1989, 1991-1993, 1995); "Bruno Gambone", Fortezza do Basso, Florence (1997); "Bruno Gambone.