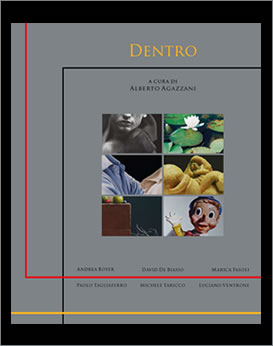 In the event created with the group exhibition DENTRO - Inside, six artists meet, even if distant from each other for their age and personal experience. They appear intimately united by the same tenacious aspiration to represent, the more faithfully possible, their surrounding reality: objects, places, people. We are in front of a perfect trip inside the virtual reality of the painted canvas and of the drawn sheet, fascinated by the obstinate research of the trusty post photographic reproduction of the real. So the paintings seem to belong to a work of great objectivity, but each closer to be the privileged location of an event, the scenic altar of representation as the amazement and the enchant centre, for the one who is still able to feel them.

Inside the objective reality of Luciano Ventrone, still lives or nudes, prudishly pleased by their own beauty, appear in scenographies of light and covered in aesthetic splendour flashes.

Michele Taricco does not rebuild his own objective reality, perceiving it on his path. Leaves fallen into water, common objects on the rims of a remote window, opaque transparencies of a pond lightened by white water lilies, he catches and transmits the moment in which the sun creates shadows and stupor.

Andrea Boyer proposes instants in black and white, exempt from the colour’s clamour as to reinforce that in the purity of chiaroscuro drawing, the intimate essence of bodies shows, as truth hides in the silence.

Marica Fasoli portrays worn shirts. The detailed image reveals in the gesture’s essence, in the alone perception of the instant: the image speaking, tells about the waiting of each other, and about their re-finding. A theatre without actors, an extreme and same time synthetic choise.

For David De Biasio, the relationship with the objects appears as instrumental and aimed to give composition, weight and balance to every represented figuration. While lights sculpt the nostalgic space of the scene, objects appear participating to a theatrical happening: still, silent and waiting.

Paolo Tagliaferro turns his look with an extreme naturalness to the game reality: with irony, with affection chooses the playthings of his not remote childhood: playthings playing with each other: The images painted with exasperately joyful and sparkling colours become cheering projections of a better world. The whole purely realistic, the whole perfectly unreal.

This exhibition comes from the necessity and the awareness that today more than ever, not only the world of art, but even our ordinary life needs explicit and authentic messages: a moment of reflection to whom, in some way, has humbly enslaved beauty to aesthetic truths speaking to the heart, astonishing our eyes and mind.